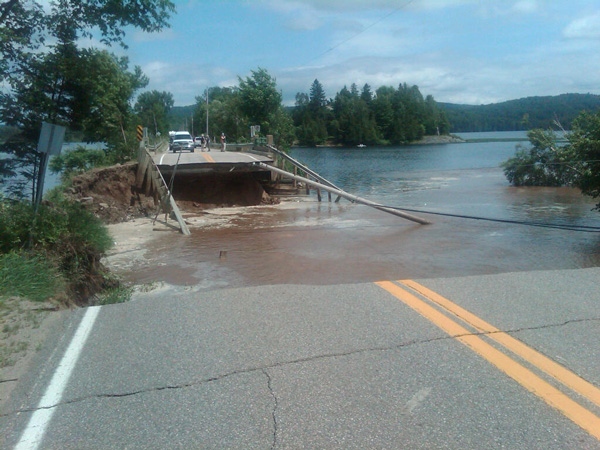 The force of the June 23, 2010 earthquake made a bridge collapse near Buckingham, Que. Viewer photo submitted by William Belair

Severe earthquake damage to buildings and at least one highway in Gracefield, Que. -- as well as surrounding areas -- prompted officials to declare a state of emergency in the Western Quebec town on Wednesday.

Claude Blais, the acting mayor of Gracefield, told CTV Ottawa the cottage-country town is asking for help from neighbouring municipalities to deal with the extent of the damage.

Gracefield's main street is closed for at least a day, and there is severe damage to several of the buildings in the town. Part of La Visitation Church collapsed, and officials are now worried that the church bell will come crumbling down.

The Auberge Vimy lost a chimney and has severe damage to the rooms inside, while the municipal community centre also suffered damage.

However, there were no reports of injuries.

Quake magnitude had the potential to cause damage

The magnitude 5.0 quake was the most severe to hit the region in a century, with its epicentre located in Val-Des-Bois, Que., about an hour away from Gracefield as the crow flies.

The area is an active seismic zone, although earthquakes are quite rare, said Bruce Pensgrave, a spokesperson with the Earthquake Information Center.

"With typical building construction in North America, magnitude fives do not usually cause major damage," Presgrave told CTV.ca in a telephone interview from Colorado.

"But if they are close to a city, they can cause things like broken windows and things being knocked off shelves."

With a report from CTV Ottawa's John Crupi, and CTV.ca