SPENCERVILLE, ONT. -- Crazy menu offerings at restaurants are not unheard of, but for one eatery south of Ottawa, they've created something special, that keeps gaining popularity.

The result of a discussion to add something new to Joe's Spencercity Bar & Grill menu in Spencerville, Ont., the Burchell Burger was born.

"We talked back and forth for maybe two or three weeks and they brought some bread over and we tried it," said nearby resident Josh Burchell, who the burger is named after. 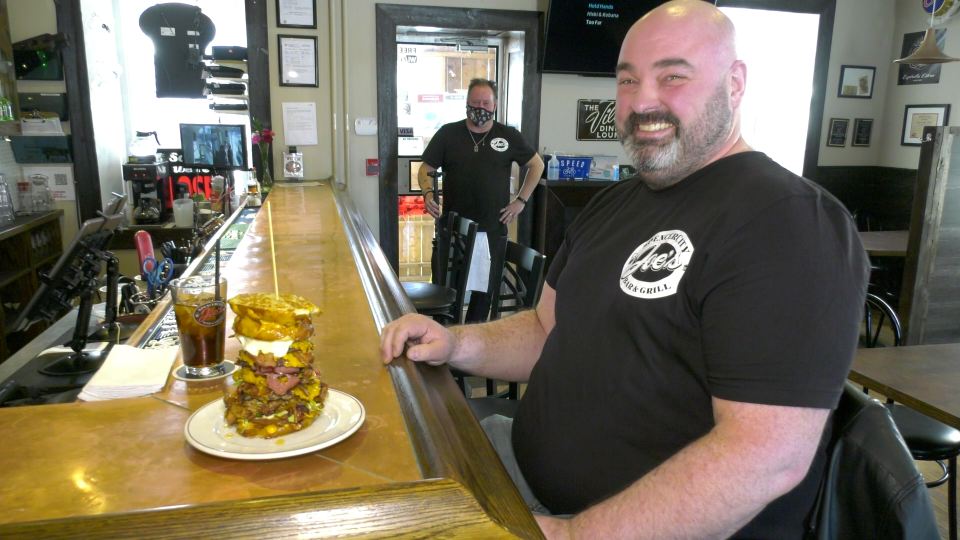 According to head chef John Scratch, the burger has become somewhat of local lore, after initially not thinking it would become popular.

"In all honesty, I looked at it and went, 'Yeah, this is not going to end well,"' Scratch said with a laugh. "This is going to be an ongoing saga of how do we make this burger bigger and better and so on and so on."

"Over the last, almost three, three-and-a-half years, it has evolved into what it is now which is it's like a pretty hefty burger," Scratch said.

"There's cheese and bacon on every layer," said Scratch. "To ease my conscience, I add in a little bit of vegetables, pickles, lettuce and onion."

It takes eight minutes to put the burger together and it's usually served with a side of fries.

Weighing in at more than 2 pounds, it sits almost a foot high. 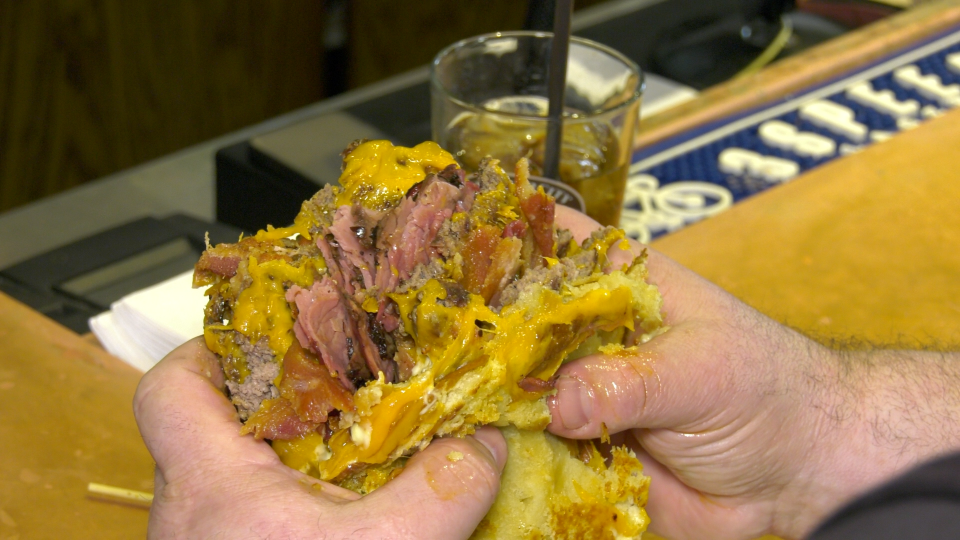 Burchell recalls the first time it was brought out from the kitchen to the dining room.

"It probably took longer to get them pictures of it taking it out than me eating it," he laughed. "They brought it out and they had to stop and get pictures and then get it setup and then put it in front of me and get more pictures."

"Everybody asks, 'What's that? What's that?' especially the size of it. Even the waitresses have to stop and show it people," Burchell said.

"People are going ohhh! And a lot of colourful language would come out and they are like, 'Oh, can I try that?' or, 'No, sweet god no!'" added Scratch.

Burchell says he's ate about 10 of them over the years, and there's now even a Burchell Burger challenge.

Burchell holds the current record, finishing one in just under 15 minutes. A customer came close to the record this past Christmas, clocking in at 16 minutes and 37 seconds.

"(He) did it at home, filmed it, he ate it, finished his beverage, finished everything. He had a good sweat going on," Scratch said.

Burchell says there is no right or wrong way to eat it.

"I usually try and pick it up with my hands and make sure I can hold it and then maybe start at the bottom two patties and grilled cheese and work my way across it and then the top section," Burchell said.

Bar staff say orders for the burger have consistently picked up over the years.

"We're getting an average of four a week now, or even five a week," said Jason Higginson. "They see it, they are going to try it. It's a really big burger and it's fun to see people eat it."

The meal costs $30, with Burchell finishing the burger for this story in just over 22 minutes.

"Its fun, I mean I love food, I always have," said Scratch. "It's something unique that's kind of been done but not been done."

"I think we've capped it off. You add anything more to it, it takes away from what it is already," Scratch said.

Burchell said he has no real tips for finishing one.

"Bring a partner maybe to share?" he said with a laugh. "I think somebody ordered it with a salad."

Burchell says he's been humbled by the experience, and glad that a discussion over adding a menu item has turned into something special.

"I'll get texts and stuff from people that are sitting here trying it and they say it's quite good," he said.