OTTAWA -- Social gatherings in indoor and outdoor spaces in Ottawa will need to be a little smaller starting Friday, as the number of COVID-19 cases continues to grow.

"This includes social events and gatherings, like private parties in your backyard or barbeques held in your home, backyards and parks," said Premier Ford during a media conference in Toronto.

"At this time, it does not include events, gatherings held in staffed, business or facilities such as movie theatres, restaurants, banquet halls, gyms or convention centres."

The premier said people must continue to maintain physical distancing of at least two metres with those outside their social circle.

Premier Ford also announced new fines for breaking the indoor and outdoor social gathering rules.  Ford said the fine will be a minimum fine of $10,000 for the organizers of illegal social gatherings.

"This is the highest fine anywhere in the entre country," said Ford, adding people attending an illegal gathering face a $750 fine.

"This is a serious situation folks. We will throw the book at you if you break the rules." 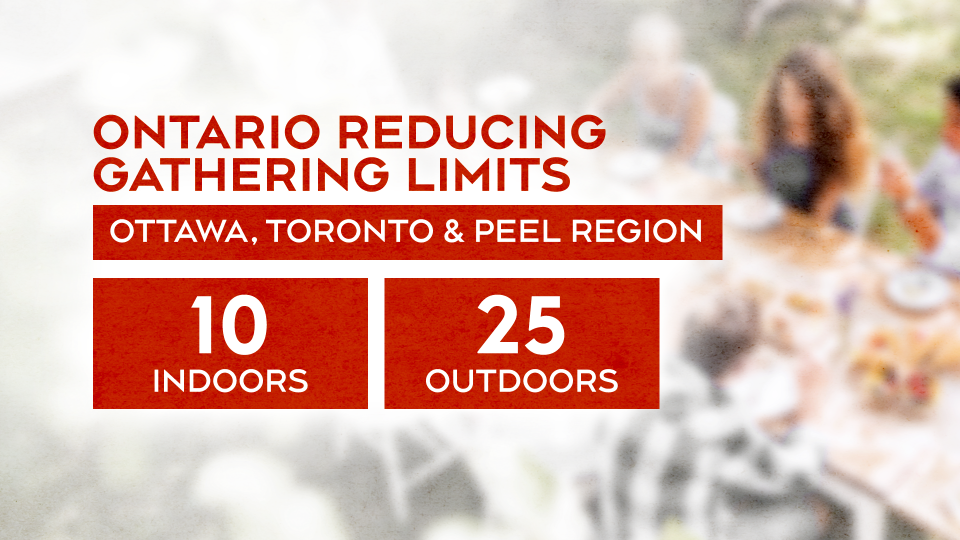 The previous limits for gatherings in Ottawa was 50 people indoors and 100 people at an outdoor event or gathering.

Mayor Jim Watson called on Ontario to limit the size of social gatherings at private residences earlier this week as the number of COVID-19 cases soared in Ottawa.

"Right now, under provincial regulations you can have 50 people in a private residence and 100 people outside. Well, unless you own a mansion, 50 people is really crammed, as is 100 people in the back yard," said the mayor during an interview on Newstalk 580 CFRA.

Watson wanted a limit of 10 people indoors for private gatherings and 20 people outdoors.

"The biggest problem we have is people hosting large parties, inside or outside their home, and they're often partying with people they don't know so there's no way to contact them afterwards if someone does come down with COVID-19," said Watson in an interview with CTV News Ottawa on Wednesday.

"We're asking people to please be responsible, put off that party until we're through the worst of COVID-19.

The mayor has also raised concerns about the discrepancies in gathering limits in Ottawa and Gatineau, noting Quebec's limit on gatherings is 250 people.

"People that had a booking at a banquet hall or a hotel room here in Ottawa are cancelling because they're going over to Gatineau because they allow 250 people for your wedding or whatever. That really has to stop," said Watson.

"The people of Gatineau don't want us going over and potentially spreading COVID-19, and we don't want the reverse to happen.