Once a very rare sight, a family of snowy owls is turning heads at Ottawa’s Experimental Farm.

“I think it’s incredible to have this kind of opportunity in the city to see the owls…and right up close,” said Mae Johnson.

Between three and six owls are calling a portion of the farm, near the intersection of Cow and Ash Lanes, home...for now.

“I think it’s great because we live just five minutes away we can just ride down and have a look,” said Jason Dubois, who was out for a bike ride with his daughters.

“It’s quite a sight, I’m glad these bird watchers pointed them out to me,” said Michael Pilon.

Experts say this has been one of the best years to spot a snowy owl. Numerous sightings have been reported in various areas in the Capital including Carleton Place, Orleans, Kanata and out by the Ottawa airport.

“They really are an incredibly spectacular bird,” said Ted Pidgeon.

“Never seen them like this just waiting for me to take their picture,” said Janet McGee.

With a report from CTV’s Katie Griffin 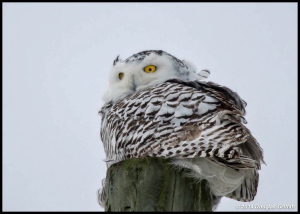