Skunked! How to protect your pets from getting sprayed this fall in Ottawa 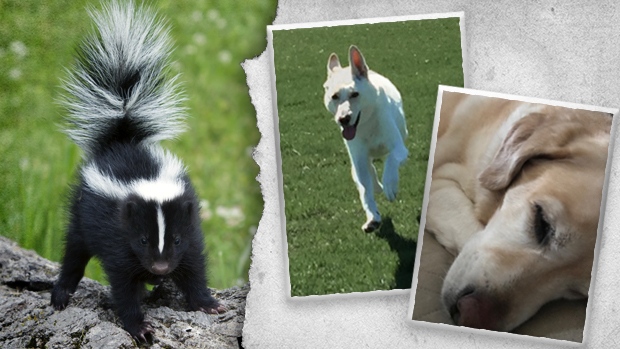 Sammy and Zoe both blasted by skunks in the last week.

Maybe skunks have declared open season on the pets of media personalities this fall.

In both cases, the stench was overwhelming.

After his white German Shepherd Sammy was hit, Carroll quickly dragged the dog into a walk in shower.

“Our dogs have been skunked before, as soon as she came in she wanted to lie down or get up on the couch…it smells like an oil fire or something”, says Carroll.  “The whole room smells like skunk. Every time that shower is on you can still smell it”.

Leigh Anne Richardson is the skunk vs. dog expert in the Richardson household. This is the second time their 12 year old retriever Zoe, has been hit by a skunk.

“The smell starts almost like a sweet tar-like aroma, but then quickly turns to an assault on your senses and seems to permeate everything in its path”, says Richardson.

A skunk’s spray is oil based, and permeates deeply into everything that comes near it, especially pet fur.

“The smell gets all over our hands. And her fur is so thick, the pungent smell lasts a long, long time” says Richardson.

Skunks don't like noise or bright lights. If you can keep your yard well lit, you will likely reduce conflict with pets. Skunks like to burrow underneath things. If you keep decks, sheds and foundations sealed off, you can help protect your pets.

So what’s the best way to get rid of skunk smell once a pet is hit? A tomato juice bath just doesn’t work; it’s not nearly strong enough.

Both families use a mix of vinegar and water on the dog’s fur, and the product “Skunk off” to spray the air and mask the smell temporarily.

There is also an effective mix of baking soda, hydrogen peroxide and dish soap to wash the dog’s fur right after it has been hit with the spray.

To overpower the skunk smell in the house itself, the Richardson’s also found boiling straight vinegar on the stove works in the immediate aftermath.

As for why Zoe was getting close to a skunk in the first place?

“Not so smart. I’m sure she just wanted to play with the skunk“, says Richardson.