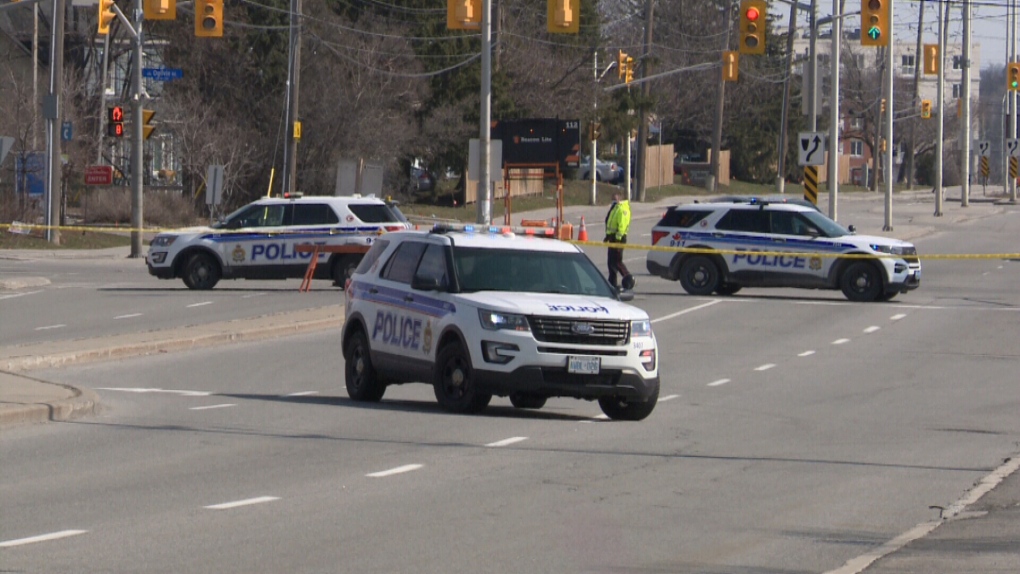 Ottawa police on the scene of an incident on Montreal Road during which a man armed with a sword was shot by an Ottawa police officer. The province's Special Investigations Unit has invoked its mandate to investigate. April 4, 2021. (Mike Mersereau / CTV News Ottawa)

OTTAWA -- Ontario's police watchdog is investigating an incident in Ottawa's east end that resulted in an Ottawa police officer shooting a man who was armed with a sword.

The Special Investigations Unit (SIU) said on Twitter Sunday morning that a police officer shot a man along Montreal Road near Ogilvie Road. The man is in stable condition in hospital.

In an updated release, the SIU said police were called to the corner of Montreal and Ogilvie Roads at around 3:30 a.m. Sunday after someone called 9-1-1 to report a man walking around with a sword. The SIU says officers found the man and at some point during what they're only caling "an interaction" with him, one officer fired at the man. The 28-year-old man was taken to hospital with serious injuries.

Ottawa police said Sunday morning that Montreal Road was closed from Ogilvie Road to Bethamy Lane as a result of the investigation. No other details were provided and police said they would not be commenting further, citing the SIU investigation.

The road reopened at around 6 p.m.

The Ottawa Police will not be commenting further on incident at Montreal Rd and Ogilvie Rd. SIU has invoked it's mandate you can follow @SIUOntario for updates.#ottnews

The SIU is an independent government agency that investigates the conduct of police officers in cases that resulted in death, serious injury, sexual assault and/or the discharge of a firearm at a person.

Area councillor Tim Tierney posted on his Facebook page Sunday to say police had responded to reports of an armed man and that the incident escalated before the individual was shot in the leg and disarmed. Tierney said he is thankful there were no casualties.

"Fortunately, tragedy was averted, and all health services and support will be made available to those involved," he said.