A giant sinkhole in the middle of St-Joseph Blvd. has closed traffic in both directions.

Ottawa police are advising the public they have closed the section of road between St-Pierre St. and Gabriel St.

Commuters are asked to take an alternate route.

The hole was caused by a burst underground water pipe. Officials say a 610mm concrete pressure pipe failed. The pipe is around 40 years old.

"All of a sudden the watermain started spouting out with water and it came out quickly," says Christine Newman who works nearby. "Shortly after that the road started to give up. It started to build up and cement just started to crack."

Witnesses also say cars and buses were continuing to drive through the water right up to the moment the road collapsed. "I don't think they realized, because it was all covered with water, that there was an actual hole there," says Cindy Brennan.

City workers quickly turned the main off and, for now, will fill in the hole and re-open the road. "They'll do repairs later on," says area Councillor Rainer Bloess. He adds that local water service has not been disrupted and no boil water advisory has been issued. St. Joseph should be opened by around 8pm.

The water pipe is not related to the concrete culvert that caused a massive sinkhole on nearby Highway 174 in September of last year. But the two incidents have some Orleans residents wondering about the roads they drive on. "It makes you feel you're not safe anymore," says local resident Ambroise Fleury. " You never know when you are going to cave in." 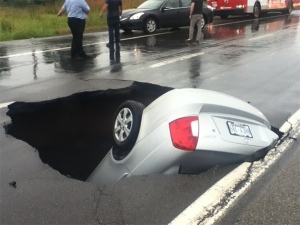 Who could forget the sinkhole along Highway 174 in Orleans last year?