Years ago, Canadians drove to the United States to get the best deals. Now, Black Friday has become so popular here, it prompted some to drive from Montreal to Tanger Outlets in Kanata.

"Better deals, less taxes," a shopper from Montreal said. "I think the sales here are worth it. 70-80 per cent off is worth it."

Some stores were offering deals of 50, 60 and even 70 per cent off on Friday.

And Black Friday sales brought out huge crowds at malls and stores throughout the city.

"I got some shoes and I got two pairs of pants," said 11-year-old Noah Phamisith.

"We got some stuff at Lululemon and Under Armour; half off everything," said another shopper.

With high interest rates and inflation, the Black Friday deals started weeks ago. Some say they should have come earlier to get the same deals.

"They were decent but I guess they were all week so it might have been a better day to come when it's less busy."

Some stores had small line-ups outside. But the longest wait was at the Nike outlet, with some waiting up to an hour in line at the cash to pay for their items at a 30 per cent discount. 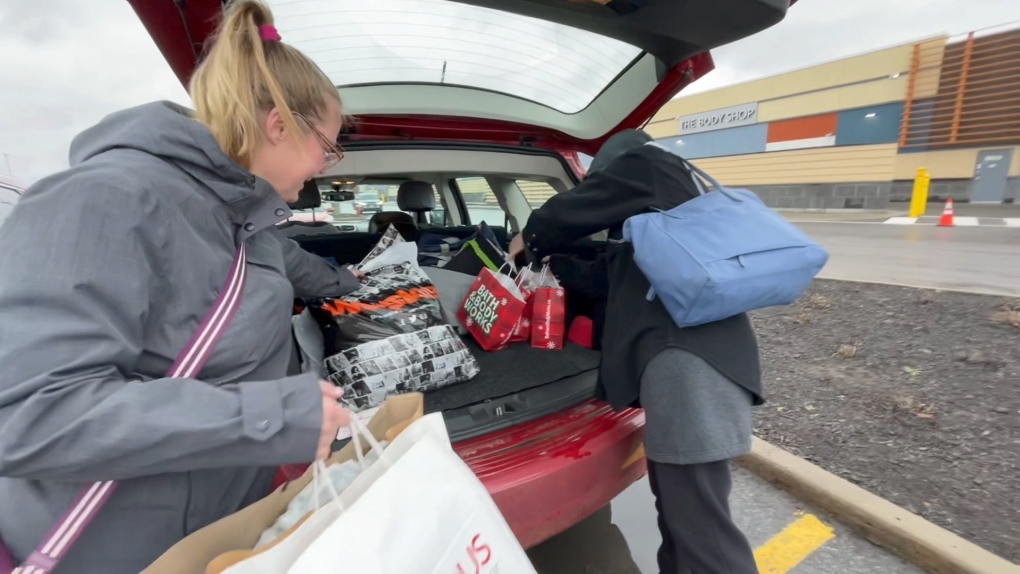 Sara Sweeting and Angela Grayson drove in from Petawawa to be first in line when stores opened.

"I mean, we left our house at 4:30 this morning and we were here at 6 a.m." Sweeting said. "A good hour before everything opened and got in line right away."

And they saved a lot of money.

"Probably in all of our shopping about $700," Grayson said.

Tasha and Brenda Poulin are a mother and daughter duo that are no strangers to Black Friday deals.

“It's kind of a tradition," Tasha said.

Out of the hundreds of shoppers at Tanger, Tiffany Surprenant came extra prepared with her own shopping cart.

"I'm tired of carrying stuff and dropping it in the store," says Surprenant. "So we came prepared this year. This is an Amazon special."

Some here though, not too impressed with the deals they found.

"Some of the stores are better than others. Like you can get 50 plus 20 off. But then there's some stores that only give you 30. Not my cup of tea. I want more," Jean Johnston-McKitterick said with a laugh.

And the deals won’t end this weekend. Consumers can click for more discounts on Cyber Monday