Shelter in place lifted in Kingston, Ont. as police continue to search for armed man 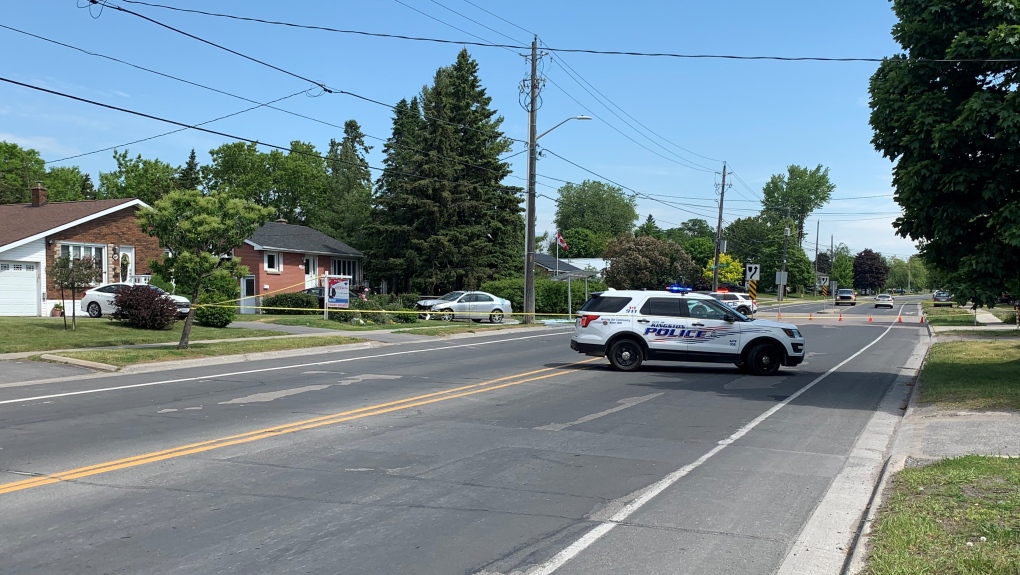 Kingston police in the area of Montreal Street and Sheppard Street, where a car apparently smashed through a bus shelter. Police say the crash is believed to be connected with the search for an armed man. Residents of the Rideau Heights area are asked to stay indoors while the search is underway. (Kimberley Johnson / CTV News Ottawa)

KINGSTON, ONT. -- Kingston police say a "community caution" for the Rideau Heights neighbourhood is over, even as officers continue to search for a man they believe is armed with a handgun.

In a release Saturday morning, police said they were called to Montreal Street and Highway 401 at around 8:45 a.m. on reports of gunshots and said a suspect had fled the area.

The suspect is described as a white man in his 20s, who was last seen wearing a white shirt and blue pants. Police believe he is still armed and should be considered dangerous.

Kingston police cordoned off the Rideau Heights area from Highway 401 to the north, Montreal Street to the east, John Counter Boulevard to the south and Division Street to the west in search of this person. Everyone in that area was asked to stay in place and other residents were asked to avoid the area.

Just before 1:30 p.m., police said the advice to remain indoors was lifted, though the suspect remained at large. Police said the alleged attack appeared to be targeted.

2ND UPDATE
Community caution is lifted for the Rideau Heights area. The male is still unaccounted for but investigation ongoing. The incident appears to be one of a targeted attack, not random or indiscriminate. Anyone with non-emergency info is still asked to call 613-549-4660.

The scene of a crash in the area of Montreal Street and Sheppard Street, just south of the 401, is blocked off and police tell CTV News Ottawa the crash is believed to be connected with the investigation into the armed individual. A damaged car can be seen on a lawn just beyond a shattered bus shelter.

Neighbours tell CTV News Ottawa they saw someone run away from the area at around 8:30 a.m.

Kingston police Sergeant Steve Koopman told CTV News Ottawa one man was taken to hospital following the crash with non-life threatening injuries. The man's injuries are not believed to be gunshot related but Koopman said a gun was fired in the area at around the same time as the crash.

Two vehicles associated with the incident have been seized by police. Montreal Street remains closed between Sheppard Street and Esdon Street while police process the scene near the damaged bus shelter.

Residents are asked not to approach the suspect if they see him and to call 911 immediately.