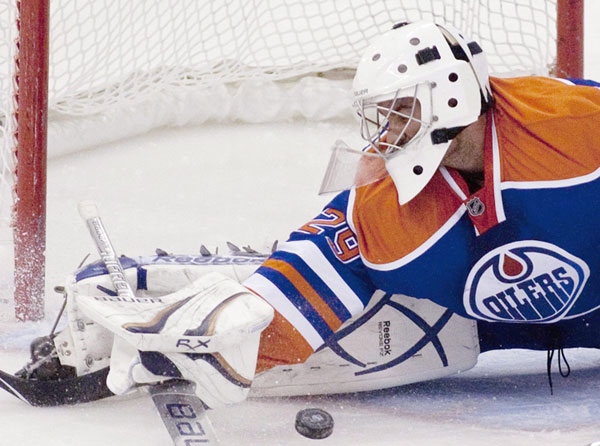 OTTAWA - Martin Gerber endured some shaky times in Ottawa, but he was rock solid Monday night against his former team.

Gerber stopped 22 of the 23 shots he faced from the Senators to help his Edmonton Oilers get their eastern Canada road trip off on the right foot with a 4-1 victory.

"It's definitely nice to have this one," Gerber said. "It's always emotional to play somewhere you've been around for a while and it was really great to see the guys out there compete and, for most of the game, we had a good game."

Andrew Cogliano scored the go-ahead goal early in the third period, then set up Gilbert Brule for another as the Oilers (7-12-4) came from behind and won for the second time in three games.

But the big story was Gerber.

The 36-year-old spent the better part of three seasons struggling in Ottawa before being waived and eventually claimed by the Toronto Maple Leafs in the back half of the 2009 season. He spent last year in Russia before returning to play for the Oilers' AHL affiliate in Oklahoma City.

With Nikolai Khabibulin still recovering from a groin injury, Gerber made his second start since being recalled and improved to 2-0 before a crowd of 17,002 at Scotiabank Place.

"He's obviously played here and this is a big game for him," Cogliano said. "The games that he's been in, we've produced well in front of him. He was in the game all game, and we came out in the third and got a couple of goals, which was nice."

After allowing Nick Foligno's goal, the 36-year-old netminder shut the door on the Senators, including making a big save on Daniel Alfredsson's short-handed breakaway attempt late in the second period and moments before Gilbert tied the contest.

"Even with their bounce at the beginning (Foligno scored courtesy of Ladislav Smid's skate), we came back and it shows a lot of confidence and I was happy with the way we played," said Gerber.

Foligno's goal was his first of the season and Brian Elliott stopped 21 shots for the Senators (11-13-1), who lost for the third time in the past four games and have just two wins in eight.

In the past 10 games, the Senators have managed to score more than two goals just twice and, not surprisingly, they've managed to win only three of those 10 outings.

"We came out pretty strong and scored the first goal, that's what you want to do ahead of the game," Elliott said. "But it kind of looked like we got into a lull there then we took a bunch of penalties in the second period and we got tired-out killing all of those.

"It's not the kind of effort we want on any given night and they kept coming and they took their chances and scored."

Foligno had gone 25 games dating back to last season since scoring against Tampa Bay on April 8 and he received a little assistance to break his drought Monday.

He cut in on Gerber after picking up Chris Neil's dump-in and had his back-hand attempt initially saved, but Smid managed to kick the puck into his own net after arriving on the scene.

That was the only goal through a dour opening 20 minutes in which Edmonton somehow managed to be outshot 11-7 despite rarely venturing into the Senators' zone.

The Oilers didn't do themselves any favours by giving up three power-play chances to the Senators in the first while earning none of their own.

It was the reverse in the second, however, as Ottawa spent almost half of the frame shorthanded after being whistled for four minor penalties, a point that Senators coach Cory Clouston attributed to his team taking the Oilers too lightly and disrespecting their opponent.

"I don't know if I agree with that," Alfredsson said. "I don't know if you can say taking penalties it taking another team lightly. He's probably got a better view than I do, but I didn't feel that way."

Edmonton didn't score on their first three chances and gave up the short-handed breakaway to Alfredsson. Not long after Gerber bailed the Oilers out on that one, Gilbert beat Elliott with a shot from the top of the faceoff circle to tie the contest.

Early in the third, Cogliano deflected Brule's point shot through Elliott. Another 8 1/2 minutes later, they swapped places with Brule converting Cogliano's cross-crease pass to make it 3-1 before Hall scored with Elliott pulled in favour of the extra attacker.

"The turning point is really when I miss my breakaway shorthanded, they come down and score and get back in the game," Alfredsson said. "If I score there, we win the game and it changed everything."

Notes: Edmonton right-winger Ales Hemsky, also listed as day-to-day with a groin injury, didn't play Monday. ... ... The Oilers move on to Montreal to face the Canadiens on Wednesday. ... The Senators' next game is Thursday night when they meet the San Jose Sharks in Dany Heatley's first game back in Ottawa since his trade in September 2009.