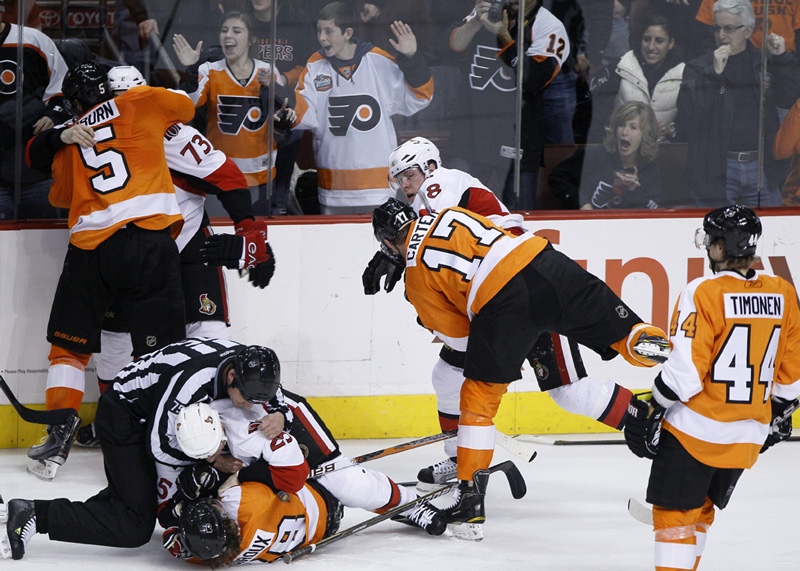 PHILADELPHIA - This was the kind of old-style NHL fighting that could have sold a pay-per-view.

Flyers versus Senators: Brawl for it All!

Hey, the haymakers were wildly more entertaining than another Philadelphia blowout.

Mike Richards scored twice in a performance overshadowed by a fight-filled third period and the Flyers trounced the Ottawa Senators 6-2 on Thursday night.

"The fans like it," said Flyers forward Claude Giroux, smiling. "It's a good time."

The game turned nasty in the third with the Flyers cruising toward their NHL-high 31st victory. There was plenty of pushing and punching after a quiet first two periods. The ice was littered with helmets and sticks -- there were two simultaneous fights late in the game that surely would have made the old Broad Street Bullies proud.

The teams combined for 126 penalty minutes; Ottawa had 15 penalties for 69 minutes and the Flyers 13 for 57.

"When the game gets out of hand, sometimes it gets a little hot and emotional out there," Flyers forward Daniel Briere said. "It's going to happen. I don't think it's a big deal.

"Guys did what they had to do and you move on."

Chris Pronger was back in the lineup for Philadelphia five weeks after breaking his right foot. Pronger, the 2000 NHL MVP with St. Louis, was injured Dec. 15 against Montreal and missed 13 games.

He started against Ottawa and was paired with Matt Carle.

Richards and Briere made it 2-0 only 4:14 into the game, sending Senators goalie Brian Elliott on the way to his 10th straight loss. Scott Hartnell and James van Riemsdyk each scored in the third to break open a one-goal game.

Tempers flared after the two quick goals in the third and Jeff Carter, not known for fighting, exchanged blows with Ottawa's Jesse Winchester. Carter and Winchester each got five minutes for fighting.

"I wasn't doing much else out there, so I figured I'd do something," Carter said.

The penalties were being announced when the Flyers scored again, this time from Andrej Meszaros for a 6-2 lead. The public address announcer then resumed rattling off a lengthy list of players who were sent to the penalty box in the scrum that was highlighted by the Carter-Winchester brawl.

Elliott left after allowing six goals. Elliott, who has two career shutouts against the Flyers, hasn't won since Dec. 26 versus Pittsburgh.

The dustups continued. Briere pushed and shoved and was sent to the penalty box for holding his stick while getting rough; Giroux mixed it up with Ottawa forward Nick Foligno, and then two fights broke out at the same time: Hartnell versus Jarkko Ruutu and Philadelphia's Jody Shelley versus Chris Neil. Philly's Sean O'Donnell also tussled with Matt Carkner.

"At least we're not rolling over and playing dead. We have a lot of fight in us," Foligno said. "It's just frustrating we're not getting the wins."

By then, the Flyers had built enough of a cushion for rookie goalie Sergei Bobrovsky. He was cruising until the second period when he had a brief lapse that let Ottawa pull to 3-2. Milan Michalek scored on a short-handed breakaway and Foligno followed less than 90 seconds later with a rebound to make it 3-2.

When the Senators couldn't score any more, they dropped their gloves.

The crowd started chanting "Goalie fight!" because the two netminders were about the only two players left who hadn't gone toe-to-toe.

"It's a tough building to play in," Senators coach Cory Clouston said. "We showed a lot of character. We didn't lay down."

Flyers coach Peter Laviolette wasn't thrilled his skill players were the ones jostling on the ice.

"It's probably not something you want to see on a regular basis," he said. "I think you're always worried when you see something like that."

Briere was the topic of a mini-controversy in Philadelphia when he was snubbed from the NHL all-star game. He got the spot Wednesday when Calgary Flames captain Jarome Iginla withdrew so he could spend time with his ailing grandmother.

The Flyers made quick work advertising Briere all-star gear before the game and he wasted no time showing why he was worthy of a spot. He opened the game with a slapshot only 2:03 in for his 25th goal, and has scored a point in eight of his last nine games.

Richards followed with a goal and he scored on the power play in the second to make it 3-0.

"We're playing with confidence right now, and confidence is a scary thing in the NHL when you have it," Richards said.

Notes: The Flyers won their 999th career home game. They will become the first expansion-era team to hit 1,000 when they reach that milestone. ... The Flyers lead the Eastern Conference with 67 points a year after they lost in the Stanley Cup final to the Chicago Blackhawks.