Senators fans Kelsey Pilon and Tyas Montgomery always dreamed of getting engaged in front of thousands of fans at the Canadian Tire Centre.

But with COVID-19 restrictions keeping fans away from the rink, they had to take matters into their own hands.

Pilon and Montgomery have been together for almost two years.

“I don’t know how I could live without her,” says Montgomery.

“I never thought I would find true love until I met him,” says Pilon.

The only other love that maybe comes close is that of hockey, and the Ottawa Senators.

“I just love this place,” Pilon tells CTV News Ottawa while in front of the Canadian Tire Centre on Monday. “The atmosphere here, and the diehard Sens fans, it just makes me so happy. It just brings people together, and I love it.”

She always imagined what her dream engagement would look like.

“It was definitely on centre ice, at the Ottawa Senators game, with the Senators right at the bench,” she said.

Their change of plans, caused by restrictions that keep them and other Sens fans from seeing the games live, meant Montgomery needed to come up with a new plan.

“I always wanted to do kind of a special sort of thing for her,” he says. 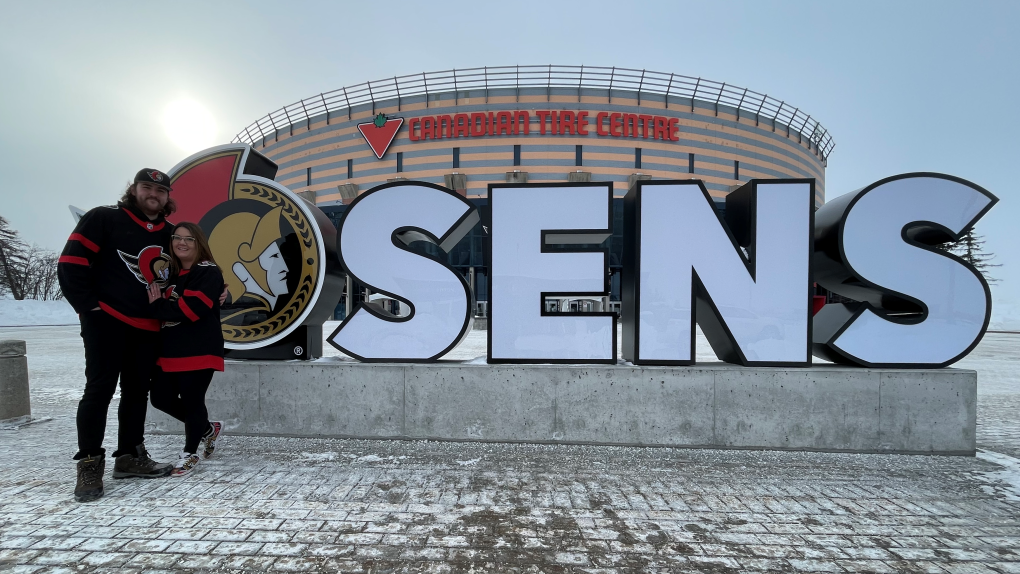 On Sunday, Montgomery took Pilon for a scavenger hunt of their favourite places they’ve been to while dating, finishing with one last stop in front of the Canadian Tire Centre.

“The last clue for the Scavenger hunt was this place; and, it just reminded me of all the times we’ve been here, and now it’s an even more special place for us here,” says Montgomery.

The couple made their way to a large ‘Sens’ sign at the CTC plaza.

“He got down on one knee, and asked me to spend the rest of his life with him; and, I said yes!” Pilon said.

After all, when you have true love, who needs thousands of spectators?

“We’ve got each other,” Pilon says. “That’s all that matters.”