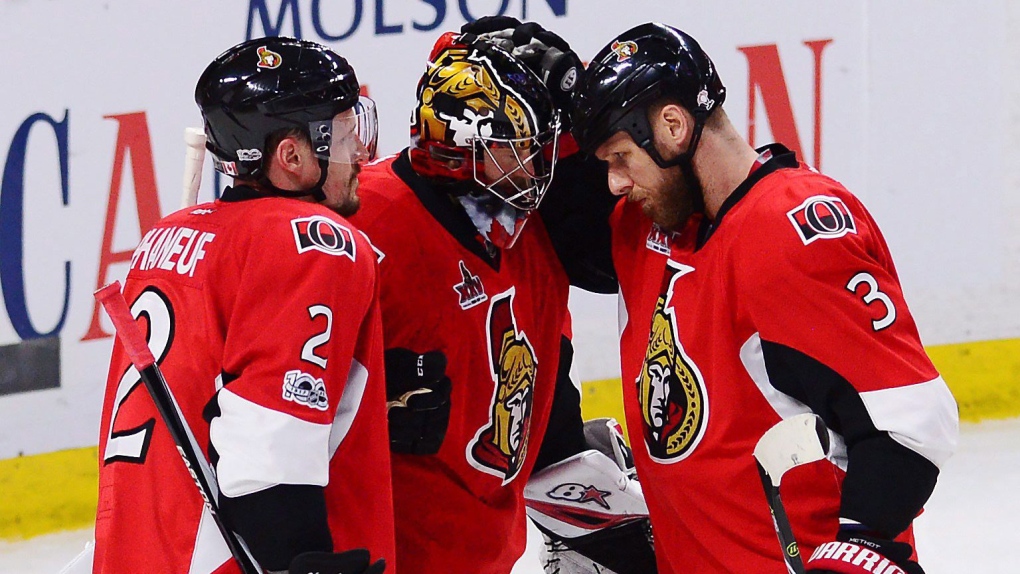 OTTAWA -- The Ottawa Senators have had a knack for doing the unexpected this post-season. They'll need to do it one more time to advance to their first Stanley Cup final in a decade.

The Senators take on the defending champion Penguins in Pittsburgh on Thursday night in Game 7 of the Eastern Conference final. The Senators are 0-5 all-time in Game 7s, tying them with the Arizona Coyotes for the worst record in all of North American pro sports.

But this team has repeatedly rebounded after being written off in these playoffs, most recently in this series. After losing back-to-back games to the Penguins, including an embarrassing 7-0 beating in Game 5, the Senators put forth one of their best efforts in Game 6 to take a 2-1 victory and force the deciding game.

"I remember coming home after we lost 7-0 and I was driving home talking to (defenceman Dion Phaneuf) and he was like 'We're going to get this series' and I was thinking the same thing and it's how do you think that after you lose 7-0?" said Ottawa forward Clarke MacArthur. "So we got one of the two and we have a job to do going into Game 7.

"I believe in the group we have and I know when we play our game and if we're on we can beat any team in the league and if we're off, you can have an off night. I feel like this team, I've never been on a team that reloads as quick as we do and that's what this time of year is all about. It's forget it, move on and we did that and now we have to forget last night too."

Following the loss the Penguins were just as eager to put Game 6 behind them. Unlike the Senators, the Penguins are in very familiar territory.

The Penguins were in the exact same position a year ago as they faced the Tampa Bay Lightning in Game 7 of the Eastern Conference final where they went on to win 2-1. Two weeks ago the Penguins eliminated the President Trophy-winning Washington Capitals in Game 7 with a 2-0 victory.

The Senators haven't played in a Game 7 since the 2012 Eastern Conference quarter-finals where they were eliminated by the New York Rangers.

Not surprisingly, the Penguins see their familiarity with Game 7s as an advantage.

"You know, I think they know what to expect, and now it's a matter of going out and earning it and controlling what they can and doing your very best to get the result that we're looking for."

"We've gone through this, we know what to expect out of our group," added 40-year-old forward Matt Cullen. "We have a comfort level with our plan and the way that we need to play. These are the fun games to play. So as a group, we go into it with a lot of confidence, knowing that we're going to need our best game and expecting that we'll bring it."

However, the Penguins are 0-7 in Game 7 at home after losing Game 6 on the road.

Ottawa has just five players remaining from that 2012 Game 7, but the Senators do have a handful of veterans who've experienced long playoff runs and series that have done the distance. Boucher has had them share what they've been through, but in the end he believes simplicity is key.

"It's just a game, but the tough part is to actually take everything out and make it just a game and make it what it is," said Boucher. "It's ice and boards, our team against their team, the same as yesterday, and everything outside, the big picture that's your (reporters) job.

"I think we just need to stick to what we are, what we've been doing and our strengths. The minute we try to fall into the other team's strengths we're done and I think that's our main focus."