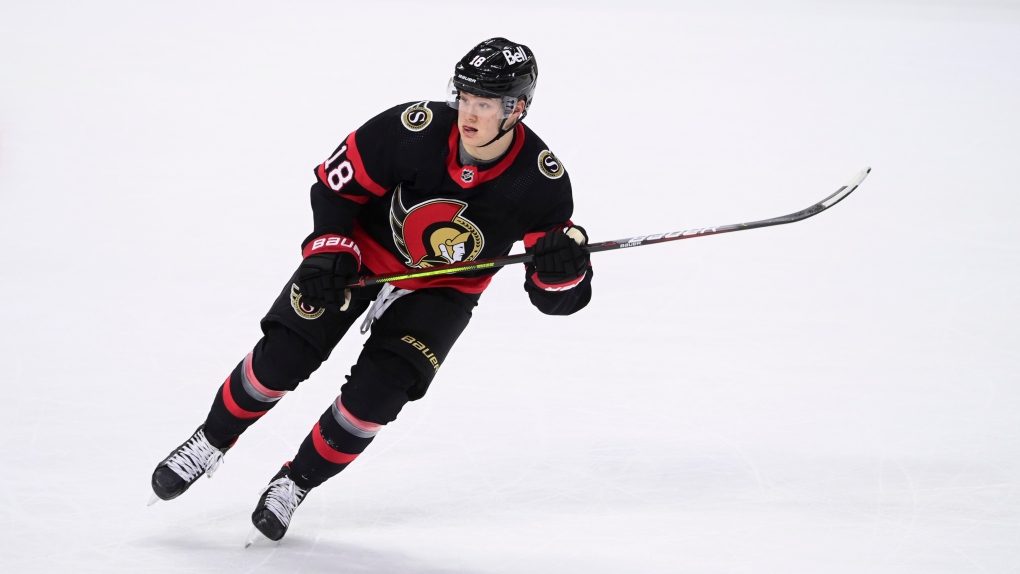 WINNIPEG -- Rookie Tim Stützle was full of praise for his teammates after notching his first NHL hat trick.

It was Ottawa's third consecutive victory.

"We played a great game as a team," said Stützle. "Gus (goaltender Filip Gustavsson) was unbelievable as well. He kept us in the game and had some huge saves. It was a great team win today.

"Our D did a good job and our line played really well tonight. We had some really good looks. We really deserved the win tonight because we worked very hard for that."

Leading 2-1 in the third period, Stützle restored Ottawa's two-goal lead with his second goal of the night at 5:11 _ a quick release up high from the faceoff circle past an off-balance Connor Hellebuyck.

Stützle nearly scored his third of the game late in the third but Hellebuyck robbed him with the glove. The rookie completed the hat trick with an empty-net goal with six seconds remaining on the clock.

The 19-year-old credited his linemates Connor Brown and Shane Pinto for making the hat trick possible. Brown, who also scored, assisted on two of Stützle's goals. Pinto had one assist.

"Those two guys are great players and I really enjoy playing with them," said Stützle. "We try to make plays over the ice all the time.

"We talk after every shift, trying to connect better. Especially Brown, he's great for me and helps me out a lot."

Mason Appleton and Mark Scheifele scored for the Jets (28-22-3), who have lost six in a row on home ice. Hellebuyck stopped 19-of-22 shots in defeat.

The Jets were coming off a 4-0 playoff-clinching win over the Calgary Flames that snapped a seven-game losing skid and they carried that energy into Saturday's contest.

Winnipeg buzzed around the net, cycled the puck with ease and tested Gustavsson early and often. They hit the post twice in a two-minute span.

But it was the Sens who broke the scoreless draw, against the run of play, when Brown deflected defenceman Victor Mete's shot past Hellebuyck at 10:13 for his 20th goal of the season.

Before the Jets could regroup, the Senators doubled their lead 1:16 later through Stützle's deflection of Artem Zub's shot from the blue line. The play was made possible by a bad giveaway by Hellebuyck behind his net.

Jets coach Paul Maurice's men were leading 10-3 in shots but were down 2-0.

"I thought we looked like a team that just broke a seven-game streak and qualified for the playoffs and beat the team that knocked us out of the playoffs last year and we spent a lot in that game," said Maurice. "There wasn't a whole lot of emotion.

"The hard work was there, the effort was there, but the emotion was hard to find."

The first intermission did the Jets some good because they came out firing for the second.

Moments after a tremendous save by Gustavsson on Andrew Copp, the Jets wouldn't be denied again as Appleton slashed the deficit at the 55-second mark. Scheifele stole the puck behind the net and fed Appleton in the slot for his first since Mar. 27.

Scheifele scored a consolation goal with 53 seconds left in the third period on a sensational saucer pass from captain Blake Wheeler before Stützle completed his hat trick.

This report by The Canadian Press was first published May 8, 2021.