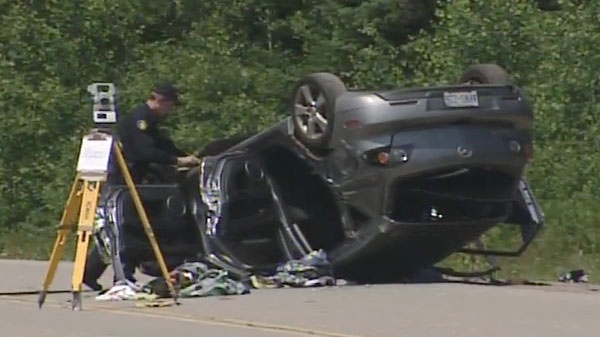 A police officer examines the scene of a fatal crash on Highway 60, near Algonquin Park, Monday, June 27, 2011.

A woman was killed and a 19-year-old Pembroke man was airlifted to hospital after a single-vehicle rollover on Highway 60 near Algonquin Park early Monday morning.

Ontario Provincial Police were called to the highway, just west of Madawaska, at about 3:30 a.m. Monday.

Police say Kyle Gorman was driving his 2004 Mazda eastbound when his vehicle left the road and struck a large rock, causing the car to roll on its roof.

Gorman was airlifted to hospital in Ottawa. His passenger, an adult female, was pronounced dead at the scene. Her name will not be released until next of kin are notified.

Police say there have been 23 deaths on eastern Ontario roads so far this year. That number is up from last year when 17 deaths were reported between Jan. 1 and June 27.

Police are continuing their investigation.