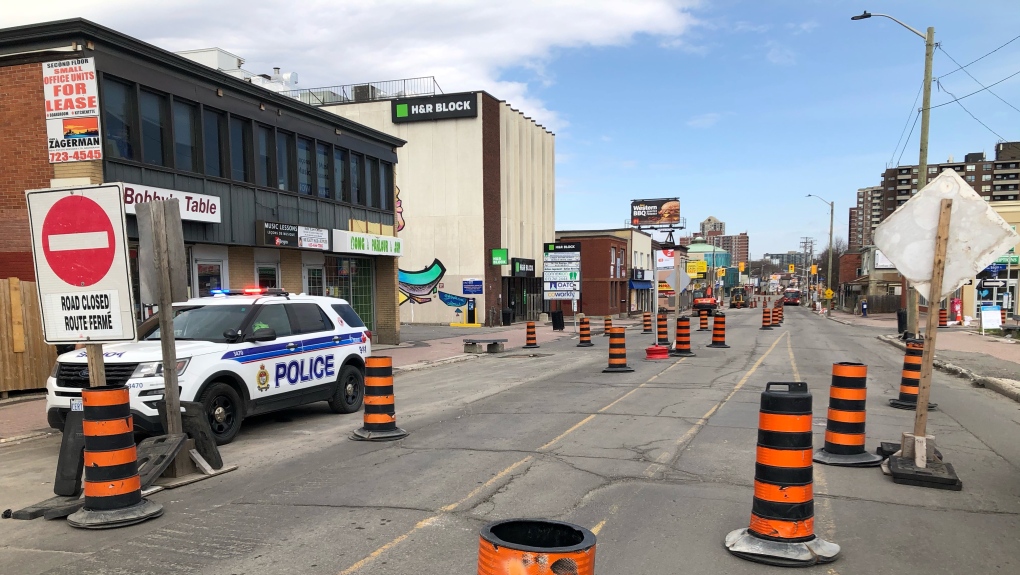 Construction on Montreal Road will keep the street in the heart of Vanier closed to all but a single westbound lane until late 2022. (Dave Charbonneau / CTV News Ottawa)

OTTAWA -- The City of Ottawa says a revitalization of Montreal Road in the heart of Vanier will keep Montreal Road down to a single westbound lane for more than a year.

New detours as part of the project came into effect Sunday. It means there will be only a single westbound traffic lane on Montreal Road between St. Laurent Boulevard and the Vanier Parkway until late 2022.

"This year, it's the big stretch. So it's really from Vanier Parkways to St. Laurent," said Coun. Mathieu Fleury.

Eastbound commuters will be detoured down McArthur Avenue.

The ongoing $64 million project aims to "construct a vibrant and welcoming main street with a well-balanced transportation network that will allow residents and businesses to thrive," according to the city. It includes burying overhead wires between North River Road and de l'Eglise Street, replacing the water main between North River Road and St. Laurent Boulevard, and adding new streetscaping features to Montreal Road including trees, new street lights and street furniture and improved sidewalks.

The project would also create a three-lane cross section between Vanier Parkway and St. Laurent Boulevard that includes two eastbound lanes, one westbound lane and cycling tracks/lanes in both directions.

The work starting Sunday is to replace the aging water main and other underground infrastructure. Construction of concrete sidewalks, cycle tracks and landscaping is also ongoing.

Businesses in the area are concerned about the construction causing further disruptions this year.

"The construction, plus the pandemic, is not so good for our businesses," said David Seba, co-owner of Quelque Chose Patisserie.

"There's less traffic, obviously, and it's not only cars, but even people walking, there's less."

At Cadmans Montreal Bagels, Ranjeev Sharma said even though they had time to prepare for the construction, it will be a difficult few months ahead.

"The pandemic is playing havoc on everybody, not just us. And then the construction on top of it is been very, very challenging," said Sharma.

"It’s going to have a big impact because it’s going to be an ongoing long project. So hopefully our loyal customers are still going to come in, they’ll just have to spend a little more time to detour."

Residents are also concerned about safety.

"It has to be done, but I feel like it may be very unsafe," said Shirley Tessier.

"Montreal Road has a lot of traffic, especially during the week. Not so much during the weekend. So I just think that people are not going to really pay attention as they should."

On-street parking will be prohibited along Montreal Road between Vanier and St. Laurent for the duration of the work and there will be limited side street access. Pedestrian access will be maintained where possible and businesses on Montreal Road remain open.

OC Transpo routes 12, 15, and 20 will also be detoured around construction.