There is a debate in Brockville on whether to demolish two historic buildings in the city's downtown core.

Now, a former city councillor and former resident of one of the buildings is speaking out, saying the city should think twice before the buildings are gone forever.

"In my years as a city councillor and more, I think we lived here for 16-17 years," Runciman told CTV News Ottawa on Tuesday, looking across the street at 8 Water St. W.

"My kids grew up here so we considered it our family home. We toured it three years ago just for memory’s sake and it brought back a lot of fond memories for all of us," he said.

While Runciman says neither building should be destroyed, the grey stucco building on Market Street West would be the one he'd save.

"Absolutely. It's one of the oldest buildings in the city and it has a real historic attachment to this area and to the tunnel and to the market," Runciman said. "We see the numbers of people coming here to tour that tunnel and having this kind of property in this very important location, to me, is saving it is a wise decision."

The city says both buildings have fallen into disrepair. A porch roof sags on one, part of an eavestrough is missing and a large crack is noticeable on the other. 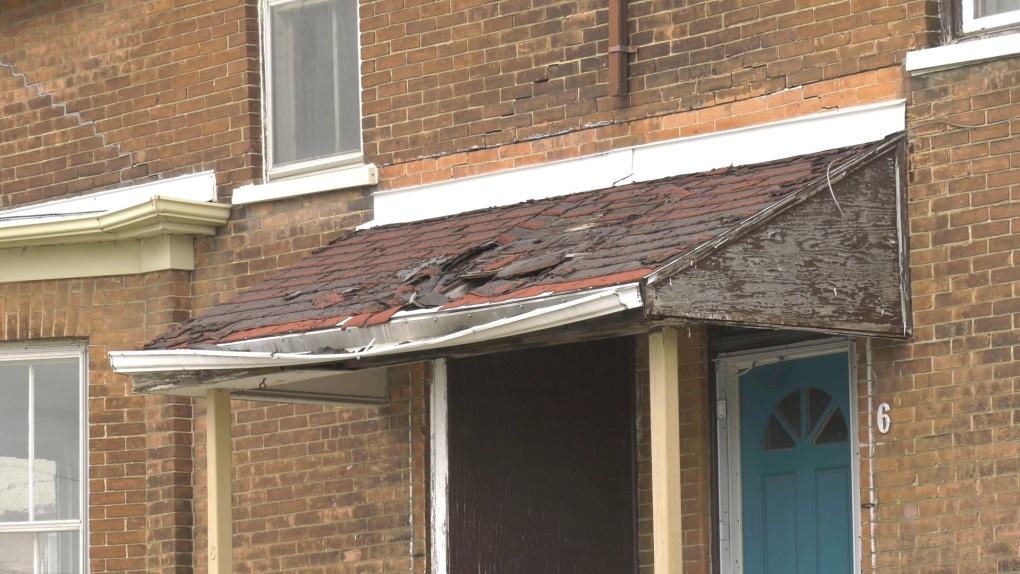 Damage to one of the two century-old buildings in Brockville that are slated for demolition. (Nate Vandermeer/CTV News Ottawa)

Officials say their time is up.

"You could put a new structure up there way cheaper than you could save this structure," said Brockville councillor Jeff Earle.

"We don't have anything that we actually want in it," he said. "I would estimate it to be close to $300,000 to renovate that building and is it in the right spot? We don't really have a use for it."

Earle worries the buildings could become a money pit if they were to be renovated.

"If someone said 'would you write me a $300,000 cheque to renovate this?' I'd be thinking well, it'd be nice, but I'd probably have some places that I can spend that money more efficiently," Earle added. "(I've) renovated an old building before and know that things can spiral pretty quickly."

He noted for public use, both buildings are not handicapped accessible, and it's unknown what kind of environmental hazards await inside.

"It could still have lead pipes in it for all we know, asbestos, who knows what else," he said. 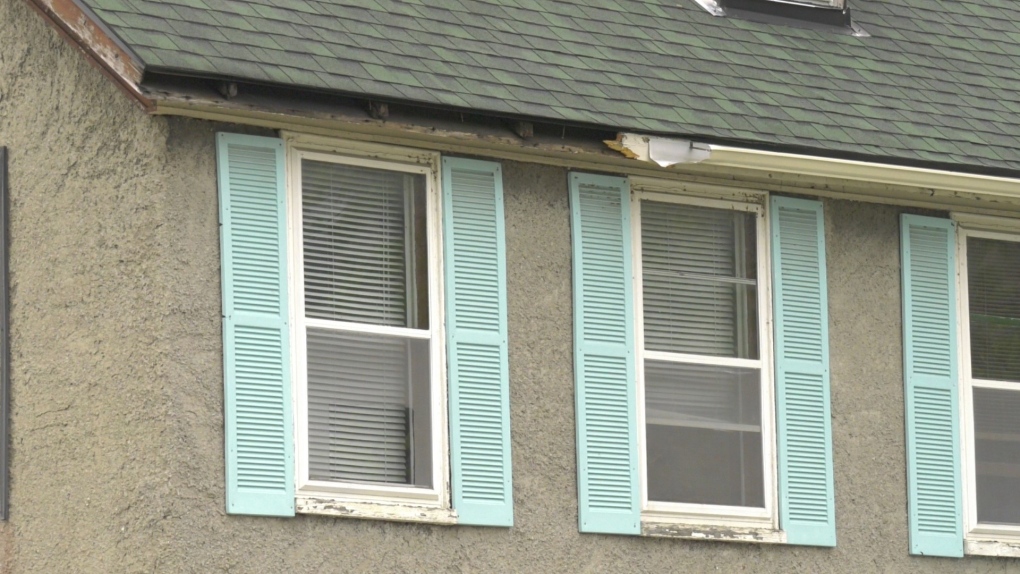 Damage to one of the two century-old buildings in Brockville that are slated for demolition. (Nate Vandermeer/CTV News Ottawa)

In 2017, the city hired Eastern Engineering to perform a structural review on the Market Street property, which was determined to be between 90 and100 years old.

The report found compromised beams, floor joists and load bearing posts, and that the structure was flawed “due to age and modification to structural members over it's lifespan.”

Water damage was also found, and it had “excessive structural deflection in key components such as the floor.”

The engineer added, “The required renovations would not be economically feasible. As a capital investment, it is unlikely that the city would redeem the cost required to upgrade the building.”

The long-term recommendation was to vacate and strategically demolish the building.

Still, the idea of tearing down both buildings does not sit well with Runciman, nor other residents.

"I walk down here all the time, I'm a downtown kind of gal, and I'm just shocked that these beautiful historic homes were slated for demolition," said resident Donna Matheson.

"I went to the tourist bureau there a lot and I just thought what a beautiful setting for Brockvillians, but also for people who are visiting to be here to come and see what a beautiful area it is," she added.

"To have more pavement does not appeal to me. I want beautiful historic homes," Matheson said.

Brockville resident David Bacchi said he was sad to hear the news of the demolition.

"It's a very scenic place and a lot people come here as visitors being the 1,000 Islands," he said. "It should stay up and I don't see why they would have any reason to tear it down.

"I'm hoping that maybe that will be overturned, but it would be a great loss to the Brockville community for sure," Bacchi said, noting that if the demolition goes forward, something else should be put in its place.

"We are not demolishing buildings to make parking," said Brockville Director of Operations Phil Wood in an email. "We are making parking on this location for the time being, due to the fact that the buildings need to be demolished."

Earle expressed the same sentiment for the location.

"I don't think it's fair to say that it's going to become parking," he said. "I think something else will be there temporarily but long term I'd like to see that whole vacant space around the building developed into something nice for the city.

"There's lots of things that we can put there. Temporarily it could become a little parkette that is right beside the market where people can have their lunch or breakfast," he added. "It could be a little outdoor cafe that goes with them when the market is on, permanently you could put a public washroom in, there is many number of things."

But Runciman thinks council should have had more public consultation before the decision of demolishing both buildings was made.

"Let's take some time, take a deep breath, step back, get the community involved in this discussion. They've been left out of this," he said.

"I think it could provide a great community service, it could attract investment. There seems to be the argument to tear this down and turn it into a parking lot, that that will attract additional investment into the city, condos for example," Runciman added. "While I think saving your historic buildings is the sort of thing that can attract the kind of investment that you want to see in your city."

Runciman referenced other historic buildings lost around the city, including the Trinity Anglican Church, which was demolished in 2018, and the former Comstock building on Courthouse Avenue.

"The Comstock building, one of the most beautiful properties in the city 40 to 50 years ago, it was torn down for what? A parking lot," Runciman added. "The last time I looked, it's still a parking lot."

He also noted the Ontario Heritage Conference is being held in Brockville in June, with delegates from across the province.

"I'm assuming the mayor is being invited to open the conference," Runciman said. "I'd like to hear his opening comments at that conference where people who are there are dedicated to preserving Ontario’s heritage and caring about buildings like this one.

"How's the mayor going to justify a kind of snap decision in my view to tear this thing down when we don't have any adequate answers for what's going to replace it?

"I hope people get engaged in this," Runciman added. "We're starting to see people raise their voices and I think there is a real genuine concern out there and caring for continuing to lose historic properties in Brockville."

The city has set aside $80,000 to demolish the buildings, and work could begin within the next month, as a demolition company has already been hired.

A sea of red and white is expected to converge on downtown Ottawa and LeBreton Flats today to celebrate Canada's 155th birthday.

After the overturning of Roe v. Wade by the U.S. Supreme Court, some LGBTQ2S+ couples are alarmed, worrying about a return to a time when they lacked equal rights to married heterosexual couples under the law. Many, fearful that their marital status is in danger, are moving now to square away potential medical, parental and estate issues.