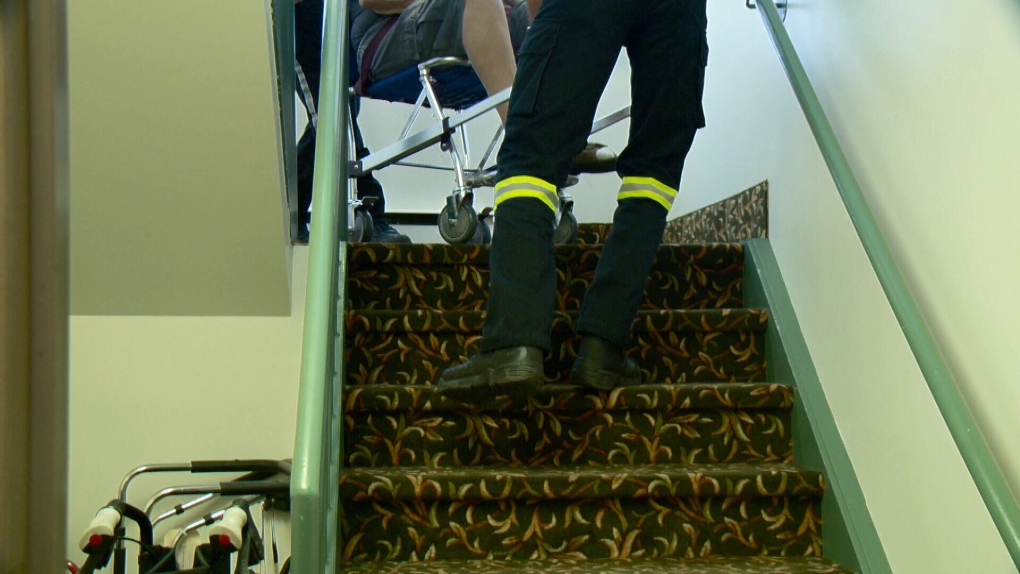 Residents at a west end seniors' home are hoping their elevator will be back in operation by the weekend.

It's been out of commission since early April and the owners of the home have been hiring a company to carry some residents up and down the stairs. Thorncliffe Place is a three-storey structure located on Thorncliffe Place in Bells Corners.

For the last 10 weeks, Ian Robertson's meal has been coming to him because he can't get to his meal.

Usually, Robertson would eat in the dining room at Thorncliffe Place, along with most of the other 70 or so residents. But the only elevator in the residence has been out of commission since April 9th.

“That's scary,” says Robertson, who has used a transfer a couple of times, “They sit you in a chair and carry you downstairs.”

Those patient transfers cost about $85 each way.  Thorncliffe says it has covered those costs for transfers they've arranged and isn't aware of any families incurring expenses as a result.

“It's taken a long time because the elevator parts are customized,” says Adriana Olvera, the General Manager at Thorncliffe Place, explaining why the elevator has been out of order since early April.  Olvera adds that the elevator will be fully modernized when it is working, probably by week's end.

“We just got news from the contractors yesterday that the inspection with TSSA (Technical Standards and Safety Authority), which is the final step, is booked for Friday morning, so we hope to be up and running by Friday afternoon.”

In the meantime, entertainment and exercise classes are being offered on each of the three floors and residents were offered space on the first floor or availability at another home, though most residents declined.  98-year-old Marjorie Kelley has taken to walking the hallways instead for exercise and a daily crib game with her son has replaced her visits with a friend in the building.

“I haven't seen her since I left the dining room,” says Kelley, “since I haven't been able to go down.”

Elevator maintenance has become such an issue in Ontario, the Liberal government last month passed the "Reliable Elevators Act" that will soon require elevators in seniors' homes, for instance, to be fixed within a week.

The Retirement Homes Regulatory Authority (RHRA) says it is aware of issues related to the elevator problem at Thorncliffe and is sympathetic to the frustrations of residents.

“The RHRA followed up with an inspection of the home on April 23 regarding complaints received about the elevator,” Helen Simeon, the Senior Manager of Communications with RHRA said in an email, “and found that the home was compliant with the Retirement Homes Act.”

In the meantime, Ian Robertson is enjoying his meal, but hoping to soon enjoy a stroll around the building.

“I gotta get out because I'm putting on weight like crazy,” he laughs.