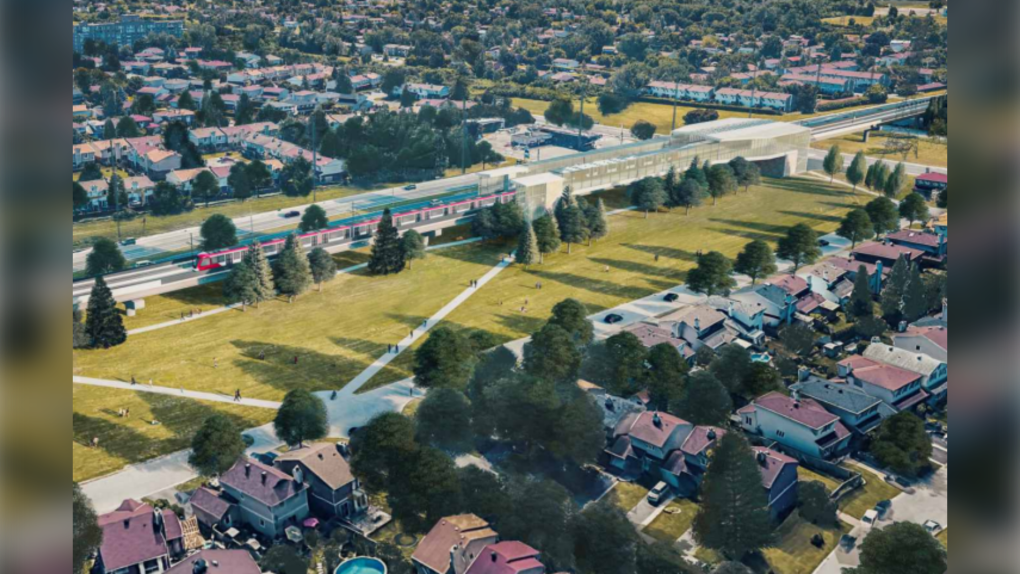 An artist's rendering of the proposed Knoxdale Station on Ottawa's future Stage 3 LRT line. Building the station would require the city to buy and demolish 120 homes in the Manor Village and Cheryl Gardens area along Woodroffe Avenue. (Photo: City of Ottawa)

OTTAWA -- An Ottawa woman, who is among hundreds of people facing an eventual eviction from their Nepean area homes so that an LRT track can be built, says she wants to see greater protections for renters who face expropriation and eviction.

On Wednesday, Ottawa city council voted 18 to 4 to approve a plan to build light rail transit to Barrhaven through the Manor Village and Cheryl Gardens neighbourhoods. The plan would require the City to buy and destroy 120 homes in the area, though the City notes that construction is many years away and contingent on funding from higher levels of government.

Alison Trowbridge lives in Manor Village, along Woodroffe Avenue, and is the Manor Village ACORN Tenant Leader. She tells Newstalk 580 CFRA's "The Goods with Dahlia Kurtz" that City Council's decision has created a lot of stress for her and her seven-year-old son, Lucas.

"Unfortunately, he has been watching all of this happen and it’s causing him tremendous stress. That's not stress a seven-year-old should be having," she said. "As much as he understands, he doesn't understand the idea of a housing a homelessness crisis but he understands the words, 'you're going to lose your home' and those aren't the things he should be worrying about as a child.

"He has nothing nice to say about Mayor Watson," Trowbridge said.

ACORN is a national group that advocates for low- and moderate-income families.

Trowbridge was among the tenants from Manor Village who protested outside Mayor Jim Watson's home last Tuesday, the day before the city council vote.

"We didnt want to come here but if our homes aren't off limits than neither is yours" - Alison Trowbridge, single mother of a 7 yr old boy who says she'll be sleeping in her car if @JimWatsonOttawa demovicts #ManorVillage for Stage 3 LRT #SaveOurHomes pic.twitter.com/I9ptreLwdd

"(Watson) didn't appreciate that," Trowbridge told The Goods. "We, as tenants and ACORN members, stand behind our decision to go to his house 100 per cent. We tried to reach out to him through phone calls and emails, over and over, and he wouldn't take the time to meet with us."

She said that ACORN members "didn't appreciate having to be" in Watson's neighbourhood but they felt they had no choice.

"In all seriousness, we had to be on that sidewalk and we had to get our voices heard and it did look like a great neighbourhood and that's all we're fighting for, is our own neighbourhood," she said.

Earlier this month, several residents of Manor Village told the transportation committee they wanted to stay in their homes because of the affordable rents.

"You are not just tearing down buildings, you are tearing apart homes and families," resident Lisa Bilow stated at committee. "It’s not just houses, it’s three to four hundred people or more. These are families. We want to stay together. We want to stay here and we have made this community our own."

The transportation committee voted to set up a working group to find solutions for the tenants, including Ottawa Community Housing.

Trowbridge told "The Goods" on Saturday morning that ACORN is pushing for a rental replacement bylaw.

Trowbridge says such a bylaw would ensure that tenants have a new place to live and have expenses covered in the event that tenants are evicted for the purpose of demolition, coloquially known as a 'demoviction'.

"If a landlord, or in this case the City of Ottawa, is going to be tearing down these homes it means that they have to step up for us tenants. They have to make sure that whatever we're losing we're granted in the end," she said. "It means the landlord or the City would have to cover the moving costs, they would have to cover the rent difference for the location that (tenants) have to stay in before they can go into the place that they were given."

'We need the public on our side'

Trowbridge says she's hopeful a rental replacement bylaw can be passed in Ottawa, but she says the public needs to get involved.

"It's going to take another fight. It's going to take having the public on our side; we need that bigger voice," she said. "I know a lot of people think one voice isn't going to be heard but, as a whole, we will be heard. We need to fight for what is most important and, right now, what's important is this housing and homelessness crisis."

In January, City Council officially declared a housing and homelessness crisis in Ottawa. One of the main goals is to build between 5,700 and 8,500 affordable housing units in the city over the next ten years and preserve the existing amount of affordable housing stock, but the mayor says all three levels of government need to make "urgent investments" in housing and homelessness to make the plan a reality.

Trowbridge says having the public engage with these issues is the key to success.

"We need people to keep listening. We need people to pay attention when we're out there," she said. "Watch the ACORN updates and stand behind us whenever you see anything regarding the rental replacement bylaw or inclusionary zoning or an eviction moratorium and use your voice. Add your voice to ours and make this problem heard."