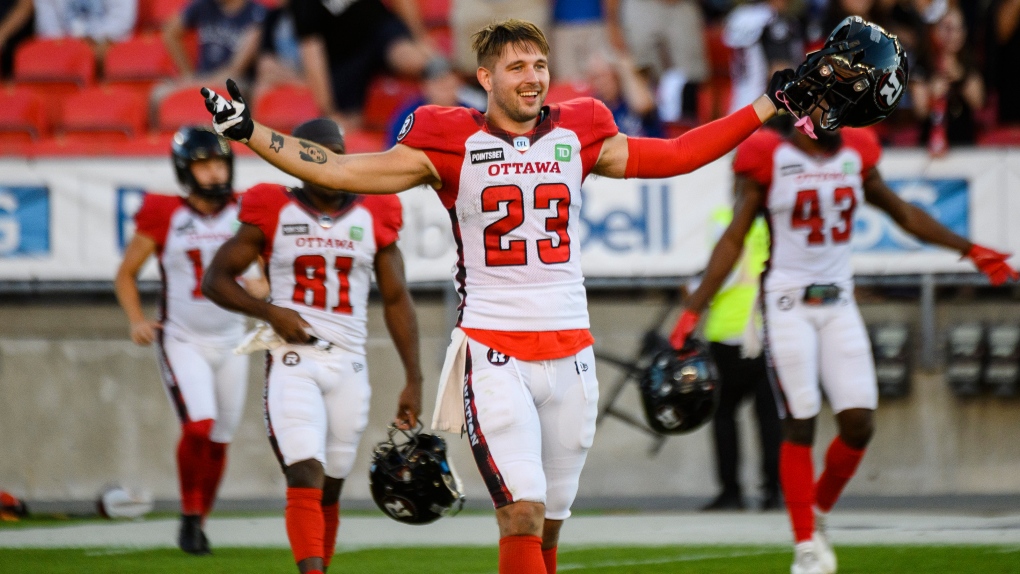 TORONTO -- The Ottawa Redblacks felt like it was just a matter of time before they removed the zero from the left side of the CFL standings column.

"Well it certainly breaks that 'well, you haven't won a game yet, right?"' Redblacks coach Paul LaPolice said after his club's 23-13 win against the Toronto Argonauts at BMO Field on Sunday.

"We're happy to get a win and happy to survive for 24 hours and enjoy it."

Ottawa receiver Jaelon Acklin had a touchdown reception and led his team with 144 receiving yards. Caleb Evans, who has assumed starting quarterback duties since Jeremiah Masoli went down earlier in the season with a leg injury, completed 24 of 29 passing attempts and threw for 286 yards and had two touchdowns.

The Redblacks improved to one win and six losses and find themselves back in the hunt for a playoff berth in a meagre CFL East Division.

"It feels like we got a monkey off our back because we were so close. I think five of those games came down to the last few minutes," Acklin said.

The Redblacks opened scoring on their first drive of the game when kicker Lewis Ward connected on a 46-yard field goal. The field position for Ottawa was set up by a 46-yard pass from Evans to Acklin earlier in the drive.

The Argos tied the game 3-3 on their ensuing drive. Boris Bede hit a 42-yard field goal with 7:36 to play in the opening quarter.

The Redblacks reclaimed their three-point lead when Ward hit a 31-yard field goal with a second left to play. Ottawa led 6-3 going into the second quarter.

Toronto responded with the first major of the game. McLeod Bethel-Thompson found Brandon Banks for a 29-yard touchdown pass as the Argos took a 10-6 lead after Bede's successful convert kick with 7:17 left to play in the second quarter.

Ottawa quickly moved the ball downfield before Evans found Acklin for a 30-yard TD catch. Ward's extra point tied the game 13-13 and that was the score heading into the second half.

"That helped us get a bit of a spark," Evans said of the late scoring play. "After that we felt like we've got to come out and keep our foot on the gas."

The reception from Acklin allowed the CFL's leader in receiving yards to eclipse 100 yards for the third consecutive game.

In the third quarter, the Redblacks reclaimed the lead on their opening drive of the half when Ward hit his third field goal to put Ottawa ahead 16-13.

In the fourth quarter things went south for Toronto in a hurry. While defending deep in their territory, Argos' defensive lineman Wynton McManis was given an objectionable conduct penalty for throwing the shoe of a Redblacks player he tackled.

"We've got to find a way to police ourselves," Argos head coach Ryan Dinwiddie said after the game. "The only way I know how to fix it sometimes is that sometimes someone's got to go.

"When things don't go our way we act like children and have temper tantrums and then we let our teammates down."

The Argos never recovered after the Ottawa score. Throughout the game, Toronto's offence was plagued with dropped or overthrown passes.

"We had those four balls, and that's a 34-20 win and it's not even close," Bethel-Thompson said. Toronto's pivot completed just 26 of 40 passing attempts for 340 yards and one touchdown for the Argonauts (3-3), who had their streak of wins against the Redblacks at BMO Field halted at five games.

END ZONE: In the second quarter, Bethel-Thompson eclipsed the 10,000-yard passing mark for his CFL career, becoming the fifth Argonaut to reach the milestone. ... Ottawa hosts the Calgary Stampeders (4-2) on Aug. 5, while Toronto hosts the Hamilton Tiger-Cats (2-5) on Aug. 6.

This report by The Canadian Press was first published July 31, 2022.