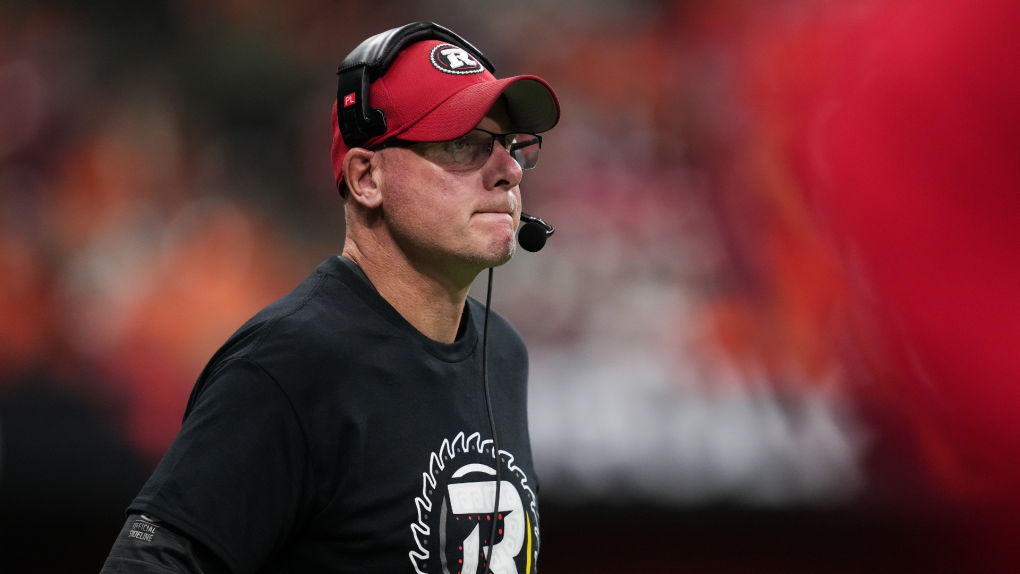 Ottawa Redblacks head coach Paul LaPolice watches from the sideline during the second half of a CFL football game against the B.C. Lions in Vancouver, on Friday, September 30, 2022. (Darryl Dyck/THE CANADIAN PRESS)

The Redblacks announced that LaPolice has been relieved of his duties hours after the club returned from Vancouver following a 34-19 loss to the BC Lions.

The Redblacks have three wins in 14 games this season, sitting in last place in the East Division. LaPolice had a record of six wins and 22 losses in 28 games as head coach with the club.

"I have enjoyed working with Paul and thank him for his contributions to this team over the past two seasons; today isn’t an easy day,” Redblacks general manager Shawn Burke said in a statement. “In this business, sometimes a change is required to help move a team forward and that’s what we’ve done here."

In a statement on Twitter, LaPolice said while he disappointed, he understands that "coaches are fired."

"I am accountable for our record and we have not won enough games this season," LaPolice said. "I want to thank Roger Greenberg and the rest of the ownership group, as well as Mark Goudie and Adrian Sciarra."

LaPolice said Burke has been an "outstanding supportive general manager who always look to find solutions and it was a pleasure to work with him."

"I cannot thank enough the players, coaches, and staff that I had the honour and privilege to work with the past few years."

LaPolice was hired as head coach in December 2019,. After the 2020 season was cancelled due to the COVID-19 pandemic, LaPolice guided the club to three wins in 2021 and three wins this season.

“Paul is a excellent man who has put everything he has into this job.  But, unfortunately, we haven’t won nearly enough games,” said OSEG CEO Mark Goudie. “We are committed to getting back to what RNation deserves which is exciting and winning football.”

LaPolice said he will now spend some time with his family.

Special teams coach Bob Dyce will serve as interim coach for the remainder of the season.

The Redblacks next game is Thanksgiving Monday in Montreal to face the Alouettes.

Campaigns for food bank donations are a staple of the holiday season, but some Canadian food insecurity researchers say the appeals don't address the systemic issues surrounding poverty.

Canada will leave the World Cup with US$10.5 million from FIFA for its participation at the men's soccer showcase.

With a cost estimate of $4.38 billion, remediation of the Giant Mine, one of the most contaminated sites in Canada, is also expected to be the most expensive federal environmental cleanup in the country's history.

NFL free agent Odell Beckham Jr. was removed by police from an aircraft before takeoff at Miami International Airport after officials said he failed to respond to requests to buckle his seatbelt and appeared to be unconscious, police and airline officials said Sunday.

CTVNews.ca has five main takeaways from Canada’s 4-1 loss to Croatia.

Sunday officially marks one month since the world's richest man took the helm at Twitter. The billionaire has seemingly left no stone unturned during his whirlwind first month as "Chief Twit." Here is a look at the range of ways Musk (who is still, simultaneously, CEO of his other companies Tesla and SpaceX) has already left his mark on one of the world's most influential social media platforms.

Bees living in isolation have half the lifespan they did 50 years ago: study

The lifespan of lab-reared honey bees today is half of what it was fifty years ago, according to a new study, which researchers suggest could be a sign that environmental stress isn't the only factor affecting the global bee population.

Protesters angered by strict anti-virus measures called for China's powerful leader to resign, an unprecedented rebuke as authorities in at least eight cities struggled to suppress demonstrations Sunday that represent a rare direct challenge to the ruling Communist Party.