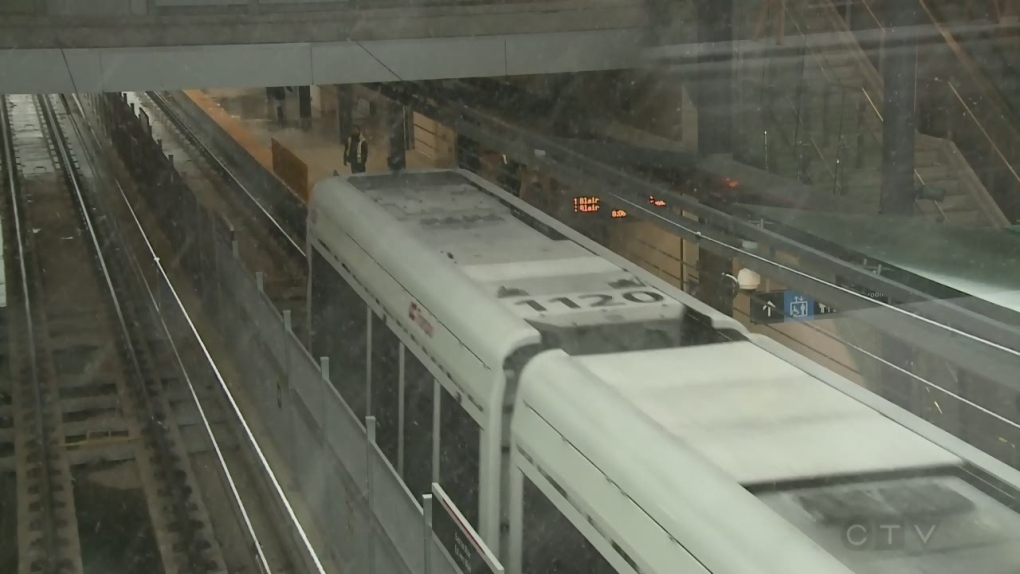 The record snowfall that buried the capital on Saturday caused a pair of issues for the city's LRT system.

OTTAWA -- The record snowfall that buried the capital on Saturday caused a pair of issues for the city's LRT system.

One rider reported an issue at Blair station shortly after 2 p.m., when a train “stopped dead in its tracks several hundred meters before the station.”

In a statement on Sunday morning, Director of Transit Operations Troy Charter said the safety sensors at the station designed to confirm no one has entered the tracks can be activated by blowing snow.

“If this happens trains in the vicinity may brake quickly, and the operator will be required to drive the train at a reduced speed to ensure the track is clear and there are no obstructions on the tracks,” he said.

“Due to the blowing snow there were reports of this occurring yesterday evening. There were no reported injuries related to the switch issue or train braking.”

"Train coming into station stopped dead in its tracks a several hundred meters before station. After a minute driver comes on intercom and states that the snow caused train to emergency stop because sensors saw blockage.

Later on Saturday, the city says snow interfered with the normal operation of a switch at Blair Station, R1 replacement bus service was implemented between Hurdman and Blair stations while crews worked to repair the issue.

O-Train Line 1: R1 bus replacement service is being implemented between Hurdman and Blair due to a switch issue. https://t.co/A9eJHszPdE

Full train service along the Confederation Line resumed around 8:30 p.m. on Saturday.