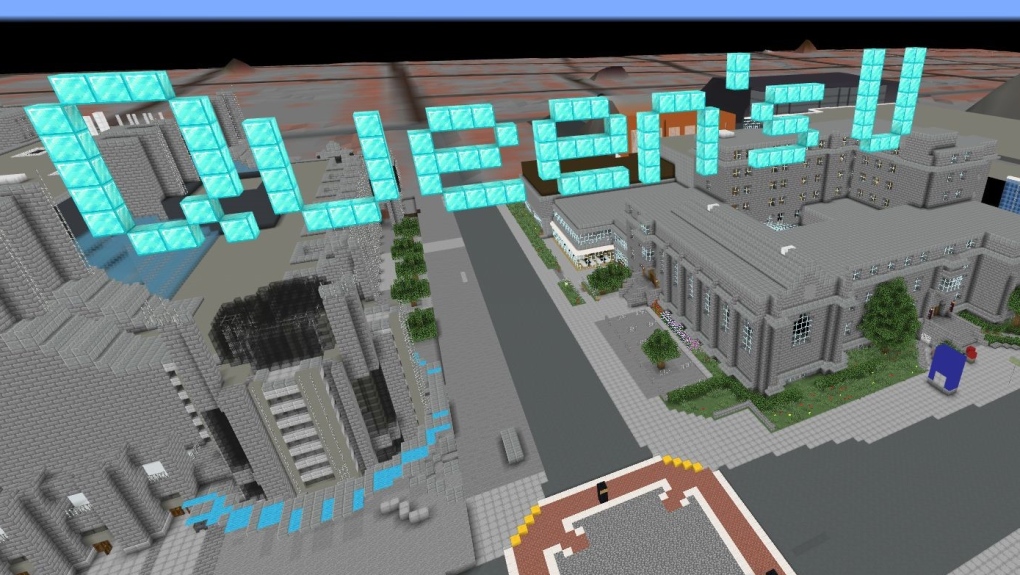 Minecraft is a game that allows users to get creative and build a world and interact with others, in a game that looks similar to Lego.

Cooper Harasyn is a fourth-year engineering student and one of the founders of the campus Minecraft Club ‘QUCraft’.

After COVID-19 closed the campus to all in-person learning last year, Harasyn says he and his engineering friends decided to take on the project.

“We basically thought ‘Hey, we can do this for Queen’s,” he said. “And (through this) people can still access Queen’s campus in a safe manner during the pandemic.”

Harasyn says it took about a year, and the group offered up their program to the department to use.

With the stay-at-home order in effect, barring people from visiting Kingston, the school says this program could show them what life would look like on campus.

Harasyn says it took more than 100 students and alumni to build it over the course of a year, and that the school provided information on the size of rooms and buildings, to make it as realistic as possible.

“We put down, pretty much the map on the floor, and then we provided that to students and people just took it and ran with it and started building on top of it,” he tells CTV News Ottawa.

Kevin Deluzio, the dean of the school’s engineering department, says in all more than 100 students from all around the world were invited to see the campus this way.

The school was also on hand to answer questions and guide them, just like on an in-person tour.

“We led the students around, what we would normally do,” says Deluzio. “Stopping at the athletics facility, at residence, and we actually went into the dining hall so students could see what that was like.”

Deluzio says the results made for a unique experience.

Harasyn says it’s the first time he’s heard of Minecraft being used for a university campus tour. Deluzio says although the current tour is done, there are plans to continue to use the program.

Harasyn says he hopes it gets new students excited about the future.

“I think it’s just hopefully something that will give them a positive experience with Queen’s campus, even before they get here in person.”