Canadians turned out by the hundreds to line downtown streets of the nation's capital on a rainy Monday to bid a final farewell to Canada's longest-reigning monarch, Queen Elizabeth II.

Ottawa and Canada are honouring Queen Elizabeth II with a national day of mourning, a memorial parade and a commemorative service in the capital.

Citizens gathered in downtown Ottawa for the memorial parade involving members of the Royal Canadian Mounted Police and the Canadian Armed Forces.

The memorial parade, which followed the state funeral in London, departed the Cartier Square Drill Hall, next to Ottawa City Hall, at 12:10 p.m. The parade travelled north on Elgin Street past the National Aboriginal Veterans Monument and the National War Memorial, and then west on Wellington Street to Christ Church Cathedral.

As a result of the parade, a number of roads in the downtown core will be closed through the day to motor vehicle traffic, and no-stopping and no-parking restrictions are in effect.

Two mounted detachments of the Royal Canadian Mounted Police, a 100-person Canadian Armed Forces quad-service guard of honour, the CAF Central Band and 17 honorary pallbearers marched in the parade. A 96-gun salute – one salvo for each year of Her Majesty's life – was conducted during the memorial parade from LeBreton Flats.

A small crowd has gathered outside Christ Church Cathedral.
The 96 gun salute has now started, one gun is being fired every 10 seconds.

"The queen is dead, and the land of the red maple leaf, the sorrow of many citizens fills the skies, the tears the prayers of her admirers take flight, like the geese of spring and autumn, making their way to the queen mother, who waits to hold her daughter close to her bosom, once again."

"We shakily sang God Save the Queen for the first time," she recalled.

Clarkson, who would go on to become the Queen's representative in Canada, said Elizabeth II was present for much of Canada's history, including 1982, when she came to Canada to sign the country's new constitution.

"Canadians will always remember the queen for coming to sign over to us what is rightfully ours; our human rights, our human freedom," Clarkson said.

Former prime minister Brian Mulroney also delivered an address during the ceremony, saying he developed a relationship with the Queen beyond that of head of state and head of government.

"She was extremely intelligent, a woman of impeccable judgment, resolute, witty–extremely witty–and kind," he said.

The commemorative ceremony was to end with a flypast over Parliament Hill and Christ Church Cathedral by Royal Canadian Air Force CF-18s, but the flypast was cancelled due to inclement weather.

There will be road closures and no-parking/no-stopping restrictions on roads across downtown Ottawa today.

The following streets have no parking restrictions from 6 a.m. to 11:59 p.m. 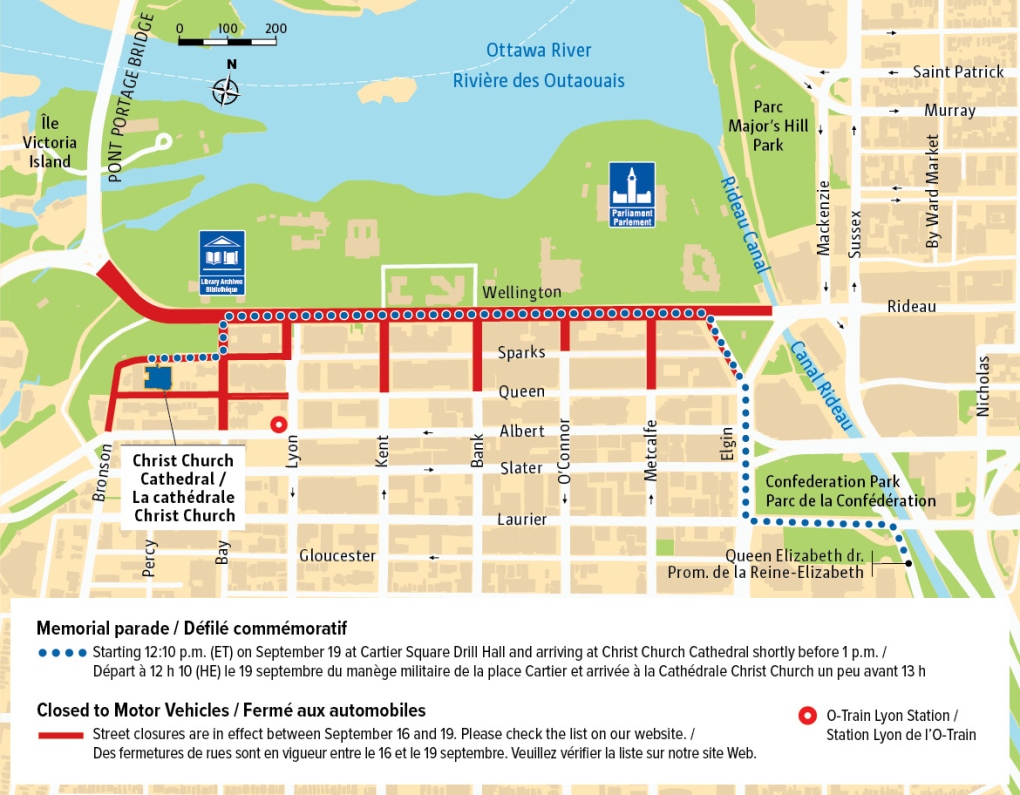 OC Transpo paused all bus and O-Train service for 96 seconds at 1 p.m. to observe a moment of silence. Buses stopped on the side of the road if it was safe to do so and O-Trains were held at stations.

--With files from The Canadian Press.