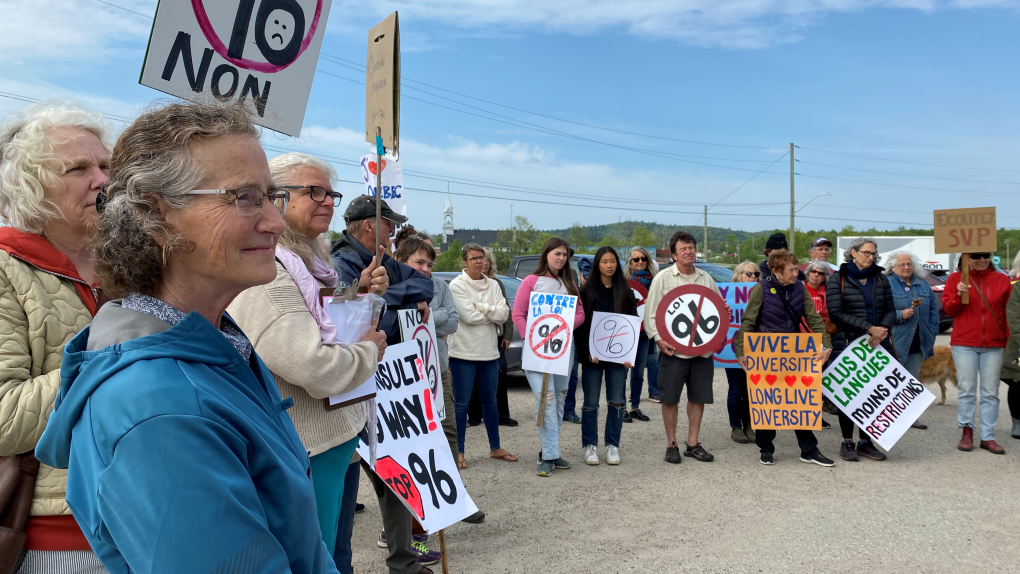 A group of protesters held a rally against Quebec's Bill 96 in Sainte-Cecile-de-Masham, Que., a community north of Ottawa. (Natalie van Rooy/CTV News Ottawa)

A protest took place in Sainte-Cecile-de-Masham, Que., a community north of Ottawa.

The group was pushing back against Bill 96, proposed legislation that seeks to affirm that the only official and common language of Quebec is French.

“There’s concerns about education, for health, for small businesses, for immigration, and certainly for how we live together in Quebec,” said Caryl Green, who was protesting against Bill 96.

The bill would require French as the only language in workplaces and municipalities.

The protestors want more languages and more cultures, not less. Some are worried about the potential impact on things like health care.

"Not being able to receive diagnoses and health care advice from a doctor in a language of ones choice, this is going to be really difficult not only for Anglophones, but for new immigrants to the province," said Gwendolyn Guth, who was protesting.

This week Quebec’s Premier tried to ease concerns about the new law.

"I want to reassure everybody speaking English, even if their fathers went to an English school or not... (providers) will not refuse to treat a patient in English if it's needed," said Premier François Legault.

"I want to be very clear, there is no change at all in the actual situation of services given to Anglophones and immigrants in English in our health-care system -- that's clear."

"If you go to the hospital, if you require any sort of government services, it will remain the way it is right now,” said Robert Bussiere. “No changes will be done."

The protestors in Sainte-Cecile-de-Masham say the government is playing politics with language.

"The bill continues to push division within the province and what people are saying is we live well together, why draw a wedge between the linguistic groups," said Green.

In just a month, they’ve had more than 11,000 people sign a petition opposed to the law.

Patrick Brown has been disqualified from the race to replace Erin O'Toole as leader of the federal Conservatives, the leadership election organizing committee announced late Tuesday. Committee chair Ian Brodie announced the stunning move in a written statement that said the party had in recent weeks become aware of 'serious allegations of wrongdoing' by the Brown campaign.