Quadruple amputee hitch-hiking across Canada on kindness of strangers 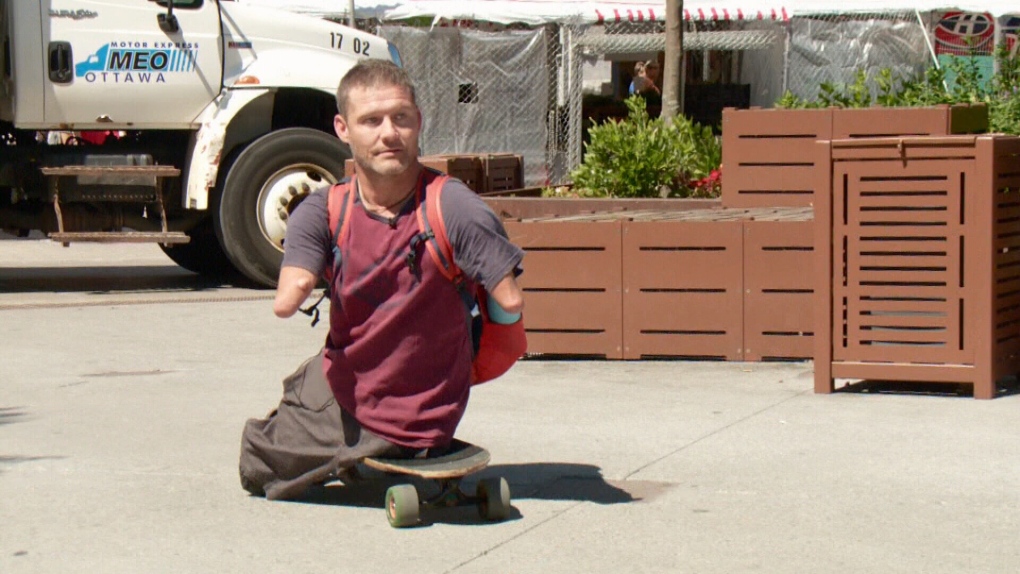 He jokes about the difficulty of hitch-hiking with no thumbs but that hasn't stopped Chris Koch in his cross-Canada journey. In fact, not much has stopped this remarkable man, a quadruple amputee, who is travelling the country on the kindness of strangers. Koch started his journey in Calgary ten days ago and hopes to end up in Newfoundland, well, when he gets there. Koch’smessage is a powerful one: to step out of your comfort zone and live life to the fullest and Chris Koch is seriously taking his own advice with this adventure.

You can't help but do a double-take when you see Chris Koch skateboarding down the sidewalk. He's used to the attention and used to the questions including how he can type on his cell phone with no hands and how he lost his arms and legs.

Koch was born that way.

“My grandma's reaction to hearing I was born without arms and legs,” Koch jokes, “was to say that my father never finished anything he started.”

That's been his philosophy since; not letting anything get in the way of where he wants to go in life.

“Like anybody, there have been bad days but honestly, my worst days have nothing to do with the fact I'm missing arms and legs,” he says, “It's stuff up here,” tapping his temple.

Koch grew up on a farm in Alberta and still helps his grandfather out when he's home.  After attending Carleton university here in Ottawa, and working for the War Amps,

Koch started travelling the world, giving motivational speeches, with the motto "If I can..."

“If a guy without arms and legs can work on a farm,” he says, “can travel the world, can snowboard, surf, hitchhike across Canada, which is ironic because I don't have thumbs, but if I can do those things, anybody is capable of anything.”

So, add to that now, hitchhiking across Canada, relying on the kindness of strangers, many of whom offer him meals, places to stay and money, which he quickly explains all goes to the War Amps.

Cornwall resident Denise Frei and her son saw Chris' post on Facebook about his cross-Canada travels and offered to drive him to Montreal today.

Frei was a police officer with York Regional Police and was injured on the job in a collision nine years ago.  She understands all too well how difficult it can be overcoming obstacles.

“It's hard when you go from a career like that, to living with such chronic pain with a brain injury,” says Frei, “It changes your life and with him, it's just amazing.”

Koch says what's amazing to him is just how kind Canadians have been to him in his solo journey across the country. And so, he tries to give back.

“I encourage people to get out there, live life to the fullest, to step outside of their comfort zone and try new things,” he says, “This way out of my comfort zone but like I said, it's been so much fun and so worth it.”

Koch plans to end up in St. John's Newfoundland having a little screech on George Street before flying home. And he's already got another trip planned; this one to Iceland in August to take part in the marathon.