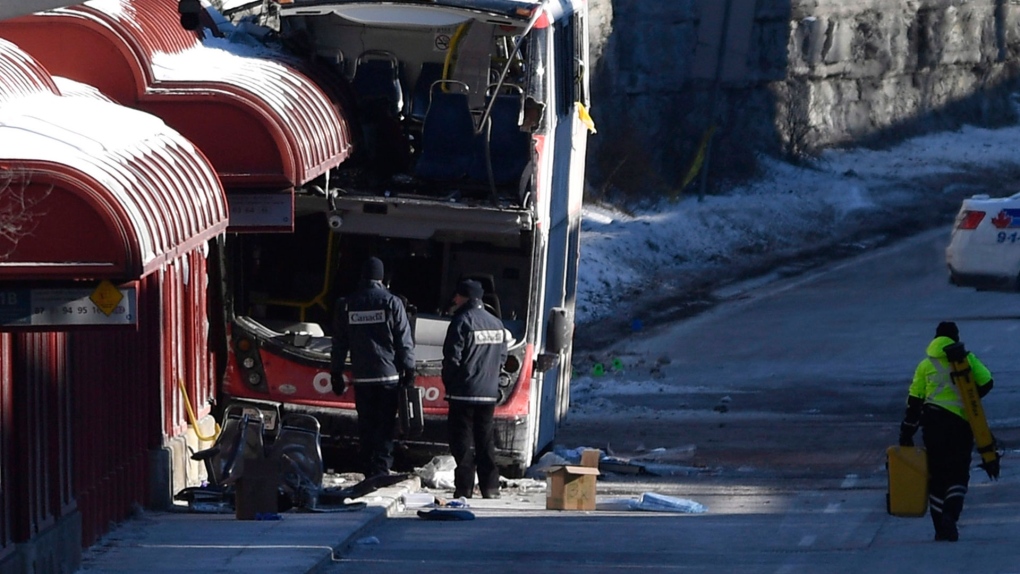 Transport Canada officials look at the scene where a double-decker city bus struck a transit shelter at the start of the afternoon rush hour on Friday, at Westboro Station in Ottawa, on Saturday, Jan. 12, 2019. THE CANADIAN PRESS/Justin Tang

OTTAWA -- In the wake of two LRT derailments in six weeks and the acquittal of the bus driver charged in the 2019 Westboro Station crash, one transportation expert is calling for quicker safety improvements for Ottawa's transit system.

Speaking on Newstalk 580 CFRA's "CFRA Live with Andrew Pinsent" on Sunday, Ahmed Shalaby, a professor of civil engineering and the municipal infrastructure research chair at the University of Manitoba, said there is still a lot of work to do to improve safety at OC Transpo.

"There hasn’t been enough improvements in the system to talk about," he said. "There have been many issues identified particularly from the Fallowfield crash and then confirmed by what happened at Westboro. There is work to be done by Transport Canada, by the Ministry of Transportation of Ontario, and by OC Transpo and the City of Ottawa, and we are seeing very little."

In the 2013 crash, the Transportation Safety Board of Canada was involved because of the involvement of the train. The TSB found that the driver of the bus was most likely distracted by the video screen that monitors passengers. The TSB recommended in 2015 that Transport Canada create guidelines around the use of video screens, improve the crashworthiness of buses and include event data recorders--similar to the black boxes on airplanes--on buses and also recommended the City of Ottawa review the need for grade separations at rail crossings along Woodroffe Avenue, the Transitway, and Fallowfield Road.

Shalaby said the two OC Transpo crashes had many similarities.

"One of those similarities is how the bus structure itself was not sturdy enough to protect the passengers and led to passengers being ejected to the bus," he said. "Transport Canada has been looking at how to improve the bus structure and make it safer, but that work is proceeding rather slowly."

He also stressed the need for event data recorders.

"In any case like this, you would know what speed the bus was travelling at, when the brake was applied, this can be recorded," he said. "They are no more expensive than a cheap smartphone but, so far, that hasn't been mandated yet."

The City of Ottawa has pledged to make improvements at Westboro Station. In a memo earlier this month, outgoing OC Transpo general manager John Manconi said measures include:

Bus travel still safe, but more work to be done

Shalaby said despite the lack of progress on some of these issues, bus travel remains very safe in Canada.

"Regardless of all the risk, bus transportation is still the safest mode of transportation available to us. It's still much safer than driving a passenger vehicle," he said. "What we need to try to do is make it even safer and take action when some of these incidents can be looked at as preventable. We need to act as soon as we can. We cannot afford to waste any more time.

Shalaby noted that these issues are complex and involve many layers of government, which does make improving road safety difficult.

"We don't have one department we can go to and say, 'This is in your hands now.' We have many. Each is responsible for a different part and if they each do their part as quickly as they can, things can be made safer quicker," he said.

"As we can all appreciate, these are really complex issues. In the case of Transport Canada, they need to create regulations for the whole country and they have to be somewhat compatible with what's going on in the United States and elsewhere, so I can understand that progress takes time, but how much time will that take?"

Shalaby added that the recent derailments on the Confederation Line LRT are also concerning.

"Passenger trains carry a lot of people and put them at risk. These trains travel over bridges and the (Sept. 19) derailment happened near a bridge and that can amplify the concern even greater," he said. "The hope is that (OC Transpo) will be able to bring the system back into service at the safest level possible.”