Protesters cause another delay at South March Highlands 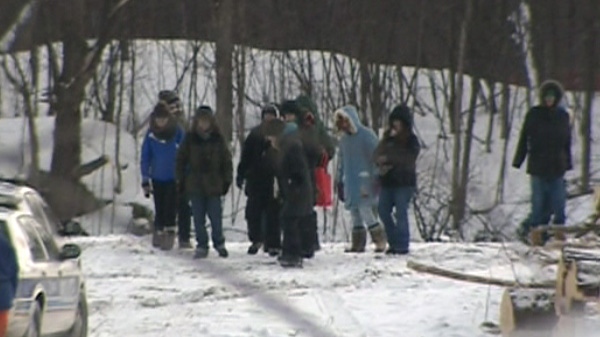 A group of protesters leave the South March Highlands after causing a disruption, Tuesday, Feb. 8, 2011.

Protesters caused yet another disruption at a west-end development site in rural Kanata on Tuesday.

Within two hours, the group agreed to leave, and was escorted off the property.

It's the latest move by protesters who are trying to block clear-cutting of the Beaver Pond forest.

A First Nations group is trying to protect the site after an archeological survey concluded there's a "high potential" that Aboriginal artifacts could be found there.

Residents in the community also don't want to see the forest go.

Two First Nations protesters attempted to block the clear-cutting by chaining themselves to tree trunks last week. Protesters have also staged a sit-in at Ottawa City Hall to draw attention to the issue.

The property has been owned by developers for the last 30 years. The current landowner, KNL Developments, plans to build about 3,000 houses there.