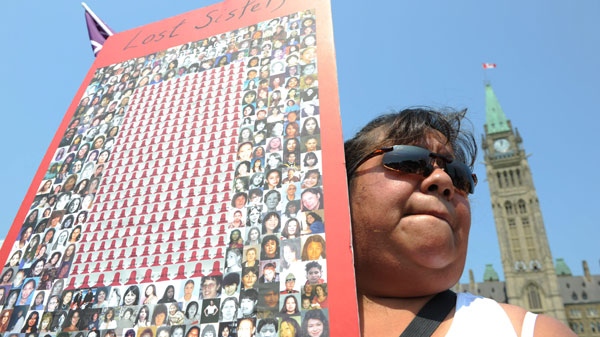 Jacqueline House of Six Nations of the Grand River territory takes part in a rally on Parliament Hill in solidarity with missing and murdered aboriginal women in Ottawa on Tuesday, July 5, 2011. THE CANADIAN PRESS/Sean Kilpatrick

OTTAWA - Women's status ministers declared solidarity with the hundreds of protesters who took to Parliament Hill on Tuesday to raise awareness about violence against aboriginal women.

But the ministers won't set up a national action plan on the issue, despite repeated requests from women's groups over the years.

The ministers concluded a two-day meeting in Gatineau, Que., just as about 800 protesters took to Parliament Hill demanding action to prevent violence against aboriginal women, and to bring attention to more than 500 who have been murdered or disappeared.

"Our missing and murdered women and girls are suffering from neglect -- neglect by the Canadian government that does not recognize them," said Laurie Odjick, whose 16-year-old daughter Maisy disappeared in 2008 from her reserve near Maniwaki, Que.

"And we as parents are the ones living through this nightmare, a nightmare of not knowing what has happened to our loved ones."

Many of the protesters were in the Ottawa region for an international conference on women and girls.

Federal minister Rona Ambrose said she sympathizes with their cause, and is well aware that aboriginal women are the most vulnerable group in Canadian society when it comes to violence.

"We are there in spirit with them and we are there in solidarity with them," Ambrose told reporters. "Because this is an incredibly unsettling and difficult issue for all of us in Canada to deal with, across the country.

"There are hundreds of missing and murdered aboriginal women."

But she rejected calls for a task force or national action plan to prevent further violence, mainly because she said governments at all levels are already doing a lot.

"I can tell you that we are all at the territorial and provincial and federal level putting in place -- and have already put in place -- very good concrete measures to deal with this issue."

Statistics Canada reported in 2009 that 13 per cent of aboriginal women over the age of 15 self-reported being a victim of violence during the 12 months leading up to the survey.

Nearly two-thirds of those victims were between 15 and 34 years old.

Ambrose pointed out that last year, the federal government had put $10 million into a five-year strategy to deal with aboriginal women who had disappeared or were murdered.

The money is partly for a database that allows law enforcement at all levels to share information.

"I believe that the call for action on this, that has happened in the last few years, truly has been answered by the federal and provincial orders of government," Ambrose said.

"And we're seeing very strong action, whether it's changes to the Criminal Code at the federal level, whether it's a new missing-persons' centre. It's time for action and we will continue to implement these programs."

In Quebec, there are more urgent problems than violence against aboriginal women, added Christine St-Pierre, the province's minister of culture and status of women.

She said she didn't want to downplay the plight of aboriginal women, but added that Quebec is dealing with a large influx of immigrants, where attention is also required, especially concerning "honour" crimes.

"I don't want to minimize the issue of violence in the aboriginal population, but there are spots in Canada where I think, objectively, it's more pressing than it is here" in Quebec, she said.

Odjick complained that the federal database is not yet operating, nor does it focus on the pattern of violence against aboriginal women. Rather, it is for all missing people.

"Our missing and murdered aboriginal women and girls, their rights have been violated. They have not received the proper investigation and support that they deserve," Odjick told the crowd, her voice wavering. "Where is the justice in that?"

Ambrose and her provincial counterparts focused their two days of meetings on deterring human trafficking, preventing honour-based violence and devising ways to encourage women to move into non-traditional occupations.

They committed to sharing best practices to prevent human trafficking of women and girls.

And on the economic-security front, they discussed ways to make sure women could have access to credit and better training for non-traditional employment.