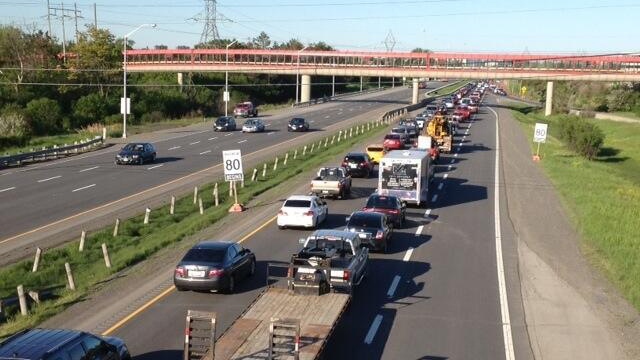 Mayor Jim Watson is onboard with calls for the Ontario government to take over the responsibility of Regional Road 174 from the city of Ottawa.

Coun. Catherine Kitts will introduce a motion at Wednesday's transportation committee meeting, asking the mayor to write Premier Doug Ford in support of a Private Member's Bill to upload Highway 174 back to the province.

"I think it's a great move," said Watson, when asked on Newstalk 580 CFRA if he supports the calls for Ontario to take over responsibility of the highway in Ottawa's east end.

"This goes back to the Mike Harris days when they downloaded a lot of different responsibilities, including Highway 174. For all intense purposes, as you know, that road is a highway but it was downloaded and now Ottawa taxpayers have to take responsibility for repairing it, snowplowing it and so on."

Last month, Orléans MPP Stephen Blais introduced the Uploading Highways 174 and 17 Act, which would return both roads to provincial jurisdiction after having been downloaded to the municipalities by the Progressive Conservative government in the 1990s.

Kitts' motion recommends the transportation committee direct the mayor to write to Ford in support of Blais' private member's bill, "on the condition that the transfer not take place until after the completion of Stage 2 east extension to Trim Road."

Stage 2 of Ottawa's light rail transit project extends the LRT from Blair station to Trim Road along the median of Highway 174.

Kitts also proposes Watson write to Transportation Minister Caroline Mulroney that if Bill 22 is approved and Ontario uploads responsibility of Hwy. 174, "the first priority for OR 174 be the planning, design, and construction of the Trim Road Park and Ride parkade."

Watson says it's time for the province to cover the costs of Regional 174.