OTTAWA -- As the public school boards debate their return to school policies for the upcoming school year, several of Ottawa's private schools appear ready to forge ahead with full, in-class instruction in the fall.

The Ottawa-Carleton District School Board is holding a meeting Thursday to further discuss their plans for September. The public school board previously floated an idea of a two-day school week, with three days of at-home learning.

The Ottawa Catholic School Board told CTV News in an email they were planning on using the same model.

"If the province indicates in early August that we need to open in an adapted model then we will need to accommodate smaller groupings of students which will necessitate some form of alternate days. The 2-1-2 model allows for smaller cohorts, physical distancing and deep cleaning between groupings. So yes we are leaning toward the same model," spokesperson Sharlene Hunter said.

Meanwhile, several private schools in the capital say they will be returning to full-time learning come September.

Joan of Arc Academy told CTV News it was also planning to move ahead with full-time, in-class learning.

"For a lot of working parents, that the model of going back to school two days a week just doesn’t work for them, and they’re looking at options," said Head of School for Joan of Arc Academy Brian Lamb. "It will mean some sacrifices for certain families, but I think at this point, they’re willing to make those sacrifices. My e-mail and my phone are ringing off the hook."

Blyth Academy said in an email their plan is either a "blended model of virtual / in-campus or a full return to campus with safeguards in place."

St. Laurent Academy said they have planned for all scenarios, and will offer full-time, in-class instruction, as well as the option to learn online from home or for students to attend class only part of the time. The school also tells CTV News it has increased its teaching staff by 40 per cent and has hired a full-time Registered Nurse to be on-staff in the fall.

They say they've seen a 300 per cent increase in web traffic this summer.

All of the schools who spoke to CTV News Ottawa said final decisions would be based on advice and directives from the Ontario Ministry of Education and Ottawa Public Health.

Public Board plan met with backlash

The Ottawa-Carleton District School Board is currently collecting feedback on its plan for September.

An online survey, which remains active until July 13, features an open feedback section in which families can give their opinions and even rate others' comments. The page has more than 21,000 comments.

Many of the highest-rated comments are critical of the hybrid model and said the at-home learning offered in the spring was inadequate. 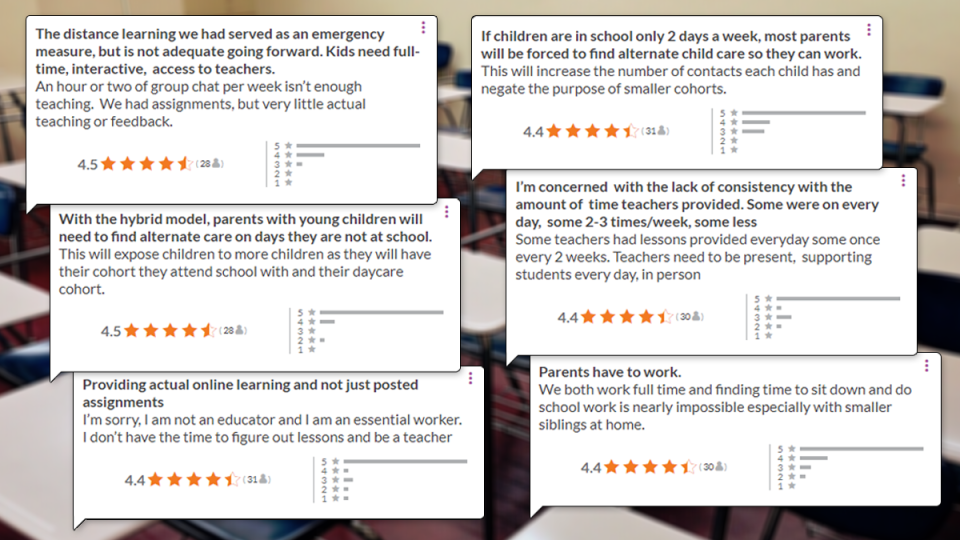 The school board meeting starts at 7 p.m. Thursday and will be streamed on their YouTube channel.

Board chair and OCDSB Trustee Lynn Scott told CTV News in an email in June the board has a lot of planning to do over the summer.

"All plans must align with the Ministry guidelines and public health directives. I think everyone wants a regular return to school, but unfortunately, our current health situation requires planning for many different and complex possibilities," Scott said.

The Province says school boards need to be prepared with their plan for the upcoming school year by August 4.

Parents who spoke to CTV News said they're concerned about balancing teaching at home with work, and about where their kids will go when they can't go to school.

"For working parents, kids will have to go to another place; either grandparents, another daycare - mixing those those groups anymore is just not any safer," said Angela Quesnel. " I’m really not happy with the plan; I think they’re making a mistake not starting full time."

"It’s pretty hard to confront the fact that after 115 days at home with our kids—not that I'm counting—that we would look to the fall and think that actually they won’t return to full-time school because the province hasn’t figured out how to offer safe full-time school for our kids," said Patti Lenard.

Monique Moreau is a parent who launched the website thisisnotaplan.ca, which includes an online petition and a place for parents to express their opinions.

"As plans started to surface about part-time options, many of us were starting to get frustrated about what that was actually going to mean for us as we try and work full-time and go back to work," Moreau told CTV News. "I decided to give parents a voice, because it seemed like no one else was doing it, and a website seemed like a quick and dirty way."

Government should listen to experts

Laura McCoy, with advocacy group Ontario Education Workers United, tells CTV Morning Live teachers are concerned about safety in the fall for themselves and for students and their families.

"We feel like the government hasn't listened to the people who know how education works, how school works," McCoy told CTV Morning Live's Leslie Roberts on Tuesday. "We're not convinced that they can reopen safely and with the best interest of our members, our workers, and students in mind."

McCoy says her group is concerned about the budget for cleaning, and about hybrid and online learning plans. Her group is calling for an independent advisory panel to weigh in on Ontario's plan for returning to school.

"With education, we have millions of students in the province and we don't know how that will work out and we're really worried about that," she said.

The Ontario government's plan for a return to schooling includes three options for boards:

McCoy says she wants Education Minister Stephen Lecce to listen to the experts, including parents.

"He needs to listen to experts, teachers, parents, public health members," McCoy said. "Of course we want to go back to school. We want our children educated. We want our children looked after safely. We need somewhere for kids to be because many parents have to go back to work, but he doesn't have all the answers and he needs to listen to the people who do."