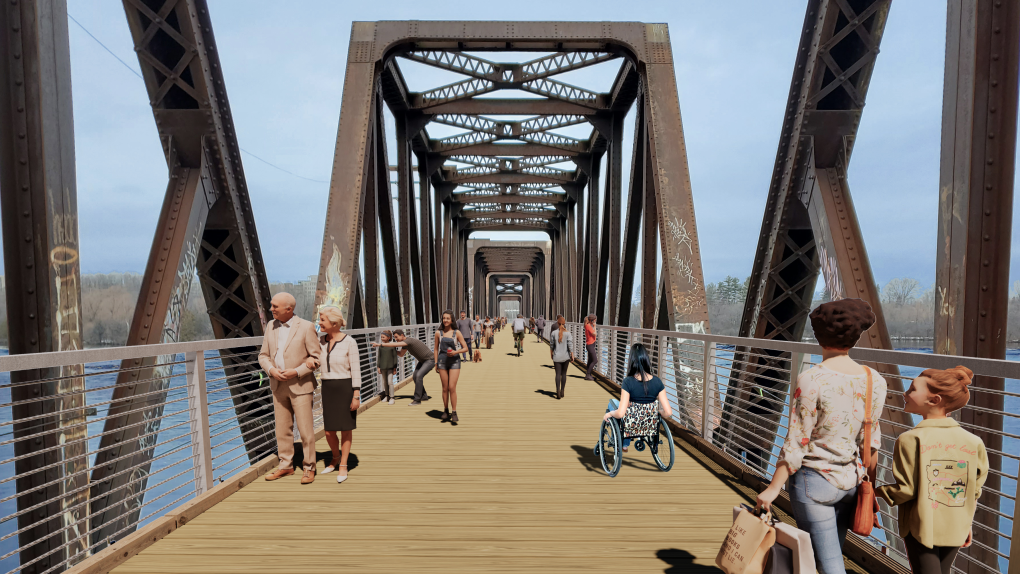 An artist's rendering of the proposed multi-use pathway on the newly renamed Chief William Commanda Bridge over the Ottawa River. A $22.6 million refurbishment would turn the defunct rail bridge into an active transportation corridor. (Photo: City of Ottawa)
OTTAWA -

The Prince of Wales Bridge that spans the Ottawa River via Lemieux Island has been officially renamed after an Algonquin elder and spiritual leader, as the City of Ottawa takes steps to turn the bridge into a corridor for walking, biking, and even cross-country skiing.

Commanda was chief of the Kitigan Zibi Anishinabeg First Nation from 1951 to 1970 and was a strong supporter of environmental stewardship. He was awarded the Order of Canada in 2008.

Council has also approved funding to rehabilitate the bridge—currently off-limits to the public—into a multi-use pathway connecting Ottawa and Gatineau until such a time as it becomes a rail bridge again, which remains the city's ultimate goal.

Council approved more than $8.9 million in municipal funding on Wednesday, to cover the balance of the city’s commitment to the $22.6 million project. The city had already budgeted $5 million to repair the bridge's piers.

The city has applied for federal funding to cover the remainder of the costs. The federal government is expected to announce its share in the coming weeks.

In addition, the city says it will dedicate one per cent of the estimated construction cost to Indigenous art.

The bridge has been a popular destination, despite technically being off-limits to the public, but this has sometimes resulted in tragedy. Two people have died since 2020 after jumping into the river from the bridge.

The plan to convert the bridge into a multi-use pathway would include new railings, but it’s unclear what else would be done to prevent people from jumping off of it.

Construction to start this year: mayor

A timeline for construction has not yet been officially approved. Staff say the project is ready to be tendered and more information will be available once a contract is awarded.

However, Mayor Jim Watson told reporters Wednesday that he expects construction on the rehabilitation to begin this year.

Speaking in French, Watson estimated it would take about a year to complete the project.

Two people were struck and killed by falling trees during a severe thunderstorm that hit most of southern Ontario Saturday afternoon.

As the May long weekend kicked off, a massive thunderstorm in southern Ontario brought strong wind gusts that knocked down trees, took out power and left at least two people dead.