Portraits of Love: A 6-year-old artist creates canvases of compassion to support kids in hospital 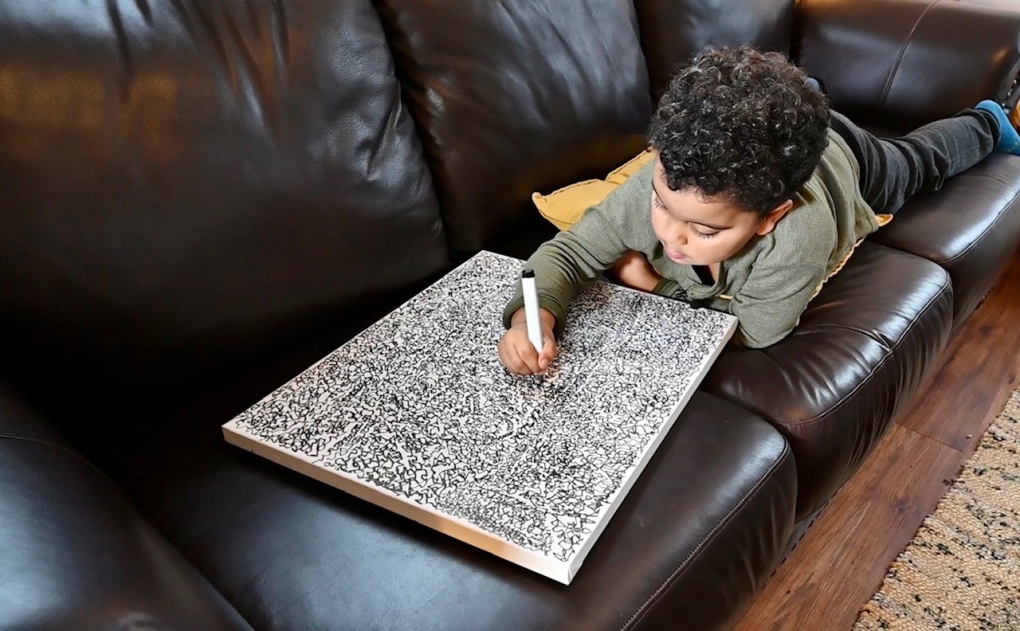 OTTAWA -- During this season of giving, an Almonte artist is unwrapping gifts to share.

Prescott is using his creativity to make the most wonderful time of the year, even more wonderful.

“Yep, I love to be creative.  Just making new things that other people haven’t done.  That’s what I really love about it.”

“I couldn’t be prouder of him.  He’s an amazing little human,” beams Otis’ Dad, Kaylen Prescott.

Otis is an artist of “squiggly lines”.   Each creation is made with black markers on white canvas.

“You move your wrist really fast and you do all these shapes and stuff.,” said the artist with a smile.

Using pencils and pens, Otis drew his first squiggles on a piece of paper.  His parents proudly showcased it where every child’s best work gets featured.

“We had never seen anything like it before and we had it up on our fridge for a while. And then we thought, let us get him some canvases and nice markers and see where it goes from there.”

It was an inspired idea that inspired the artist.  Otis drew at the table, or while lying down on the couch, spending hours hovering over each canvas.

“We’d have to bring him cut up vegetables and snacks because he wouldn’t think of any of that because he was totally focussed on the work. So, it’s pretty amazing to watch. He’s totally in the zone.”

But this is more than art for art’s sake.  Otis Prescott is creating canvases of compassion for kids; children who won’t be home for the holidays this year.

“We mentioned CHEO and it was just immediate.  He didn’t have to think anymore. He was like, I want to help kids my age.  That was his mission after that.” said Kaylen.

“They couldn’t really see their families and they can’t really come to Christmas because they’re really sick,” said Otis.

Otis would use social media to sell his work. He happens to be one heck of a golfer, and has his own Instagram account devoted to his passion.  That’s where he posted photos of his art, hoping to raise a few bucks for CHEO. Overnight, he sold all 5 canvases at $200 each.

“One thousand dollars and I have to make another ten pieces,” said the young artist.

“His heart is so pure.  It’s nice to share that goodness and love with the rest of the world,” said his Dad.

When the last squiggle is dry, Otis will have raised three thousand dollars for CHEO.  It’s money he hopes will help sick children leave hospital sooner.

“So they can spend time with their family,” Otis said.

Witnessing Otis’ outpouring of love through art is the ultimate Christmas gift for parents Kaylen and Sophie and little brother, Miles.  They believe their young artist and philanthropist is just getting started.

“It’s a beautiful thing.  I think there will be more giving to come.”