Father Joseph LeClair entered a plea of guilty this morning before a packed courtroom. LeClair gambled away tens of thousands at Casino Lac Leamy. The priest pocketed money meant for church coffers to pay that credit card debt.  He took $16,000 from the collection plate  over 5 years. He pocketed tens of thousands in fees from marriage preparation courses over five years.

As a part of the plea deal, it's agreed LeClair misappropriated $130,000 from  Blessed Sacrament Church in the Glebe.

Archbishop Terrence Prendergast says the Archdiocese continues to support LeClair. In a written statement Prendergast says ""... we now look to the future, understanding that the court's decision on sentencing will be part of any future plan. In a courageous and very public way, Fr. LeClair admitted to the addictions which were harmful to him personally and to his pastoral ministry..."

Father Joe Leclair was charged in July 2012 with fraud, theft, breach of trust and laundering the proceeds of crime. In the plea deal he entered a guilty plea for fraud and theft over $5,000.

Ottawa Police allege more than $240 thousand was misappropriated from 2006 to 2011 while an additional $160 thousand was unaccounted for. 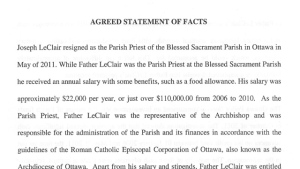