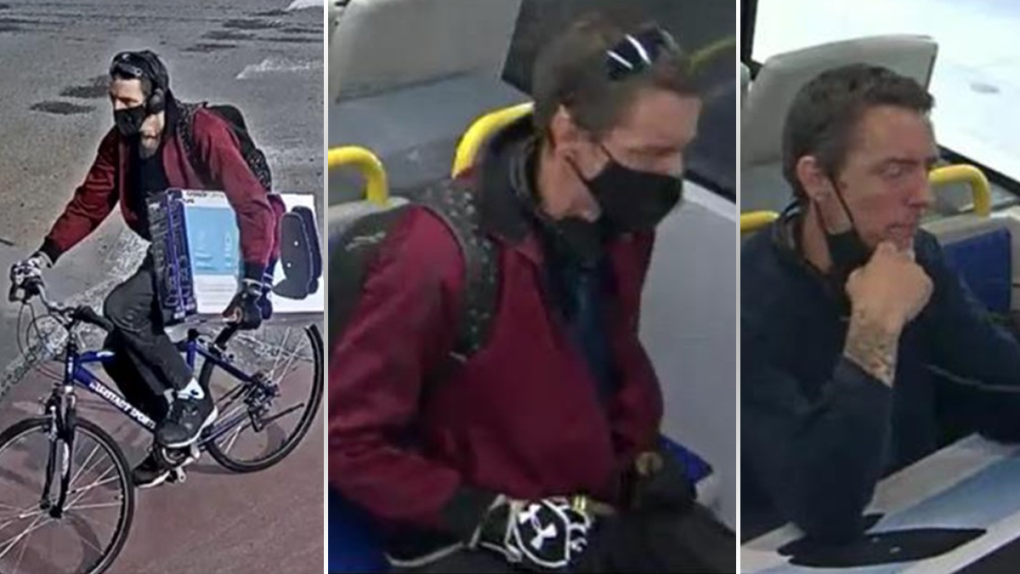 Ottawa police are asking for the public's help identifying this man, who is accused of breaking into a store at the St. Laurent Shopping Centre June 8, 2021. (Photos provided by the Ottawa Police Service)

OTTAWA -- Ottawa police are asking for the public's help in identifying a man they accuse of breaking into a store in the St. Laurent Shopping Centre after hours and stealing a back support cushion.

Police said in a release that the break-and-enter happened June 8. The suspect was captured on surveillance cameras leaving on a bicycle with a box under his arm that appeared to be a back support cushion. He later boarded the LRT. Police told CTV News Ottawa that nothing else was taken.

The suspect is described as a white man with a thin build and short brown hair. He was captured wearing a maroon-coloured jacket with a dark, long-sleeved shirt underneath, black jeans, black shoes with white soles, black and white Under Armour gloves, a black mask covering his mouth and nose, black headphones and a black backpack.

He has tattoos on both forearms and on the top of his left hand.

Anyone who can identify this man, or who has information regarding this incident is asked to call the Ottawa Police Break and Enter Unit at 613-236-1222 ext. 4533.