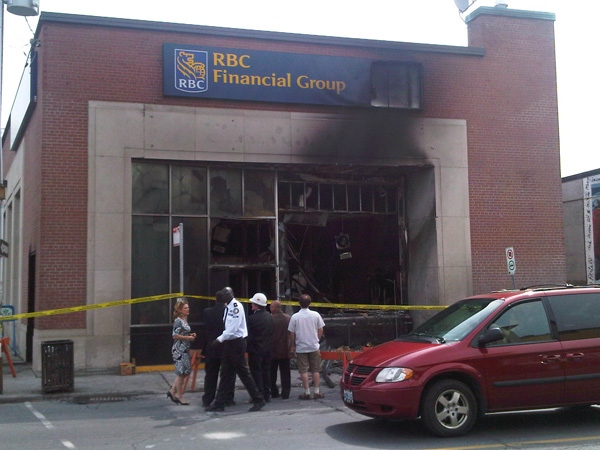 A suspicious fire ripped through an RBC branch at the corner of Bank Street and First Avenue, Tuesday, May 18, 2010. Viewer photo submitted by: Alexander Hayes

Ottawa police are looking for three or four men seen running from the scene of a suspicious fire that caused extensive damage to an RBC branch in the Glebe.

Police say witnesses saw a group of men fleeing the scene and taking off in an SUV at Bank Street and First Avenue just before 3:30 a.m. Tuesday. No further description of the suspects or the vehicle was provided.

"We're just trying to piece together what happened, how the fire was set," said Marc Messier, spokesperson for Ottawa Fire Service. He added that police will likely hold the scene for a while.

Police say damage to the building is considered extensive. Early estimates are pegged at $300,000 in damage. However, those estimates could change: "It's likely going to climb," Messier said.

Fire officials and police are now participating in a joint investigation to determine the exact cause of the fire.

"Until the scene is excavated and all debris uncovered and samples taken, I can't comment on severity or origin," Sgt. David Christie told CTV Ottawa.

He added that anyone who has information about the fire is urged to come forward.

The manager of the bank told CTV Ottawa he doesn't know when the branch will re-open for business. However, fire officials predict that won't happen for at least two or three weeks, depending on the extent of damage.

Meantime, customers can do their banking at other locations. The 15 people who work at the bank have been temporarily reassigned to other RBC branches.

Thirty-eight firefighters responded to the two-alarm blaze, which was brought under control by about 4 a.m.

Fire officials say the fire started in the ATM area of the bank, destroying the machines. The extreme heat caused heat and smoke damage to the rest of the building.

Fratelli's restaurant located next door was not damaged by the flames.

The Ontario fire marshal's office has been called in to help determine the cause of the fire.

With a report from CTV Ottawa's Vanessa Lee