Ottawa Police have now identified a Nepean couple in a murder-suicide after receiving a 911 call reporting gunshots early Sunday morning.

Police say 54-year-old Touni Marina shot and killed his wife, Safaa Marina, 53, before turning the gun on himself. The major crime unit is continuing to investigate.

Investigators say they were called to MacFarlane Road around 1:30 a.m. where they found a man and woman had been shot. The couple's son alerted the authorities.

Multiple residents living near the MacFarlane Road home told stories of loud screaming matches between the couple, even reports of hearing pots and pans smashing against the walls. One neighbour also said the husband threatened them after a request to keep the noise down. "There was a total of four people in the house and that includes the two deceased," said Inspt. Glenn Wasson. "There is no indication of any other involvement and any additional suspects."

Neighbours say bylaw was called to the home for numerous noise complaints over the years. One neighbour, who did not want to be identified, told CTV News she called police on at least one occaison for fear of the woman's safety.

"We phoned because we were worried about her ... it's such an unfortunate end and you kind of look back and say should we or could we have done more," the neighbour said.

This marks the city's fourth homicide of 2018 and the 15th shooting. 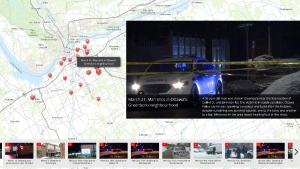