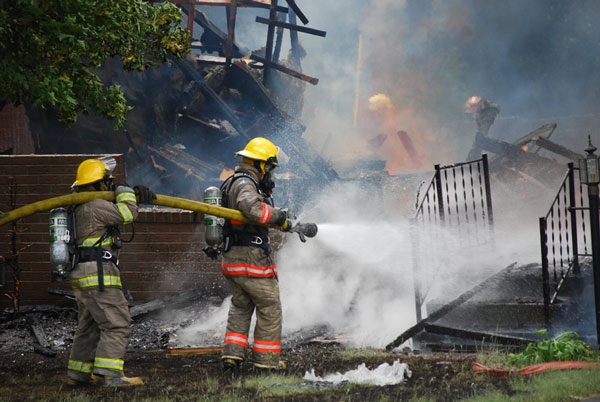 Firefighters work to put out a fire after a home exploded in Napanee, Monday, June 8, 2010. All that is left of the home are bricks and the front steps. Image courtesy: Seth DuChene, Napanee Beaver

Ontario Provincial Police have found evidence that a person may have been inside a home when it exploded in Napanee on Tuesday.

Police say evidence of a body was discovered as investigators removed debris from the site of the blast on Wednesday.

Members of the OPP identification unit have been called in to assess the discovery.

The owner of the home, who works for the Canadian Forces, remains missing.

Although police have not identified the homeowner, neighbours have identified him as Pat Painter, a soldier based at CFB Kingston.

Police were called to Queen Street, east of Barrett Boulevard, late Tuesday morning, following an explosion that levelled a house and caused flames to spread to two neighbouring homes.

All that was left of one home were bricks and the cement stairs leading up to the front entrance.

An excavator was brought in on Wednesday to remove debris in small layers, in an effort to preserve any evidence that may be mixed in with the rubble.

The cause of the explosion remains under investigation.