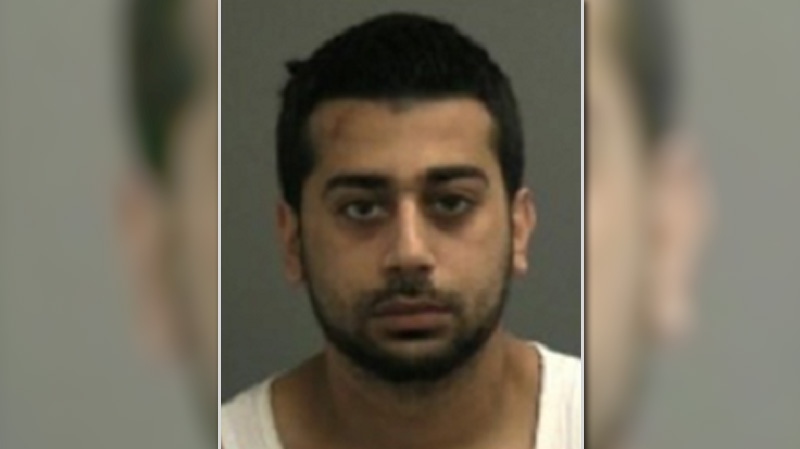 Ali Abdul Hussein was arrested after arriving in Ottawa from a foreign country on Tuesday, Dec. 27, 2016. (Ottawa Police)

OTTAWA -- A man who allegedly fled Ottawa to avoid testifying at a murder trial has been arrested by police after landing at the city's airport.

Police say Ali Abdul Hussein was arrested on Tuesday after arriving in Ottawa from a foreign country.

Hussein has been charged with failing to appear as a witness and obstructing justice in connection with the trial of Nawaf Al-Enzi, who was charged with the 2006 murder of Mohamed Zalal, an Ottawa-area drug dealer.

Const. Chuck Benoit says Al-Enzi, who was Abdul Hussein's brother-in-law, was found guilty earlier this month after a second trial in the matter.

Police say a second man, 32-year-old Mahmoud Kayem, is still being sought for the same charges faced by Hussein.

According to a 2014 ruling from the Court of Appeal for Ontario, Al-Enzi, Abdul Hussein and Kayem were initially all charged in 2008 with Zalal's murder.

The appeal court ruling said Abdul-Hussein made a deal with the Crown and gave a statement to police in which he said Al-Enzi shot Zalal in a car driven by Kayem. Abdul-Hussein also pleaded guilty to accessory after the fact, for which he received a statement of time served.

The trial judge adjourned the case for nearly four months for Al-Enzi to find a new lawyer but the man wasn't able to and sought a severance or mistrial so he could be represented by counsel at a new trial, the appeal court ruling said.

But the trial judge decided the trial should proceed, the appeal court ruling said.

Kayem was acquitted and Al-Enzi was convicted, but then appealed his conviction arguing that the trial judge's refusal to grant a severance or mistrial caused a miscarriage of justice, the appeal court said.

The appeal court agreed with Al-Enzi's argument, set aside his conviction and ordered a new trial, which ended with a guilty verdict earlier this month.

According to the Crown at Al-Enzi's first trial, Zalal was allegedly murdered over a dispute about a handgun, the appeal court ruling said.

The gun allegedly belonged to Zalal but while he was in jail he loaned it to Al-Enzi, the ruling said. Zalal demanded the gun back when he was released but Al-Enzi allegedly did not want to return it, according to the Crown's position summarized in the appeal court ruling.