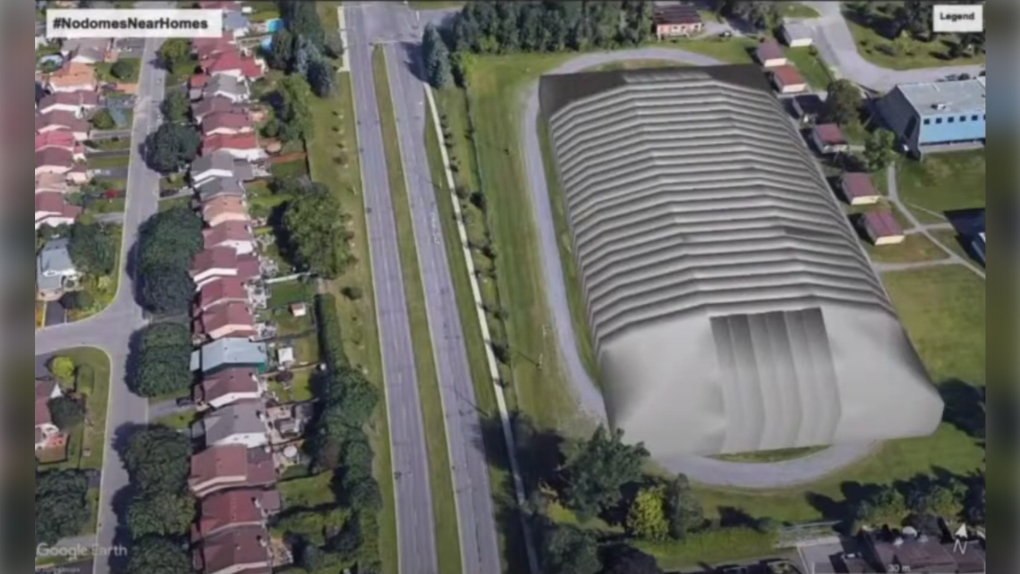 Residents opposed to a new sports dome at Garneau High School presented this rendering at planning committee on Thursday. (YouTube/City of Ottawa)

OTTAWA -- The city’s planning committee has approved a controversial sports dome at an Orleans high school despite opposition from nearby residents and the local councillor.

The Conseil des écoles catholiques du Centre-Est says the dome will be a new sports hub for Orleans. City planning staff recommended the proposal go ahead because it complies with zoning and building regulations.

But local Coun. Laura Dudas joined residents in expressing opposition for the plan, calling it “not a normal building” and saying it’s too close to homes in the area.

Planning committee heard from about two dozen members of the public on Thursday as they considered the proposal.

CECCE school board trustee Robert Rainboth acknowledged the opposition, but said the dome has a lot of local support as well.

“We hear loud and clear that there are some people who don’t want a dome,” he said. But he added that more than 1,200 people expressed support for the proposal.

“We have lots of support on our side in terms of students, parents, community groups and sports associations.”

The all-season dome would become a hub for sports in in the east-end year round, which people in the sports community say is much-needed.

“You’re going to have 300-plus families and their kids benefit from this year over year,” said Qasim Khan, president of the Orleans Minor Football Association.

In a statement, Theolis said he’s disappointed with the decision, but praised “thoughtful” comments by the councillors. The proposal also passed with some amendments, including a plan for more trees to be planted

“Iappreciated that the councillors sought all the information and many admitted that they struggled with their decision,” he said. “They acknowledged the negative impact to the community, however they concluded that the City’s current building regulations do not take into consideration how inflatable domes affect nearby residences, in our case a mere 22 metres away.

“I am grateful that in the future, the City will consider creating appropriate regulations for dome building applications.”

In a statement, the school board said it was “delighted” by the committee’s decision.

“The community sports hub will be a high quality, state-of-the-art sports facility that will benefit our students and the entire Orléans community with a year-round facility where they can practice different sports such as football, volleyball, soccer, pickleball, tennis, badminton, walking, running, yoga, etc.,” the board said.

The CECCE says it has a request for proposals underway for the dome, and a timeline for the project will be revealed once that process is finished.