Pinned in Highway 15 wreck for more than an hour

All residents along a quiet stretch of Highway 15 heard was a loud crash.

When they looked outside, the three vehicle pile-up they saw was worse than they imagined. A man was pinned under the wreckage of his truck.

"He was so pinned down and crushed, I'm surprised he even got out," says Karl Van Spengen who lives along the highway.

The collision occurred around 8:05 a.m. on the highway north of Smiths Falls.

"We have two vehicles travelling northbound and one truck travelling southbound where the truck collided with one of the vehicles," says Const. Sean Trahan of the Ontario Provincial Police.

According to witnesses, it took nearly two hours before the man and another women trapped in another vehicle were both extricated.

The driver of the truck was airlifted to hospital in a helicopter. The female drivers of the other two vehicles were taken by ambulance.

Reports indicate the head-on collision was the result of one of the vehicles attempting to pass when it slammed into an oncoming car.

Residents say the stretch of the road is prone to speeding and people trying to pass aggressively.

"This is the only stretch...so this is where they pass," says Ronnie Gilchrest who also lives on the street.

The section of Highway 15 between Ford and Perth Rd. remained closed well into the early evening. 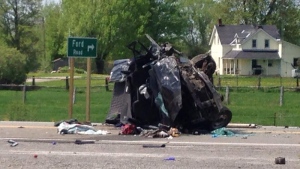