The problems with the troubled Phoenix pay system have affected tens of thousands of federal public servants.

While the federal government is taking steps to resolve the issues with the new pay system, many workers are still experiencing pay problems, and many more are feeling the repercussions from having received less salary than they're owed, or none at all.

Phoenix: Pay System Under Fire will take an in-depth look at the pay issues that have affected thousands of people in the capital region.

We will feature the latest news on the backlog of workers waiting to get proper pay. We will include interviews with the key players involved in the attempts to fix it.

We will also look at how the problems started in the first place, under the previous Conservative federal government.

Anchors Graham Richardson and Patricia Boal will be speaking live with Minister of Public Works and Procurement Judy Foote. The deputy minister in charge of the Phoenix file, Marie Lemay, will also be in studio.

We will cover the increased demand from charity at Christmas from people who never thought working for the federal government would lead to financial difficulties.

And we will have advice from experts to help people who are struggling to get by without their proper salaries.

Tune in to CTV Ottawa at 6 p.m. for the special, or live stream it on the CTV Go mobile app. 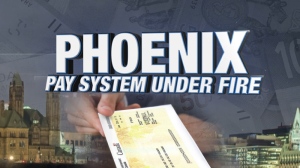