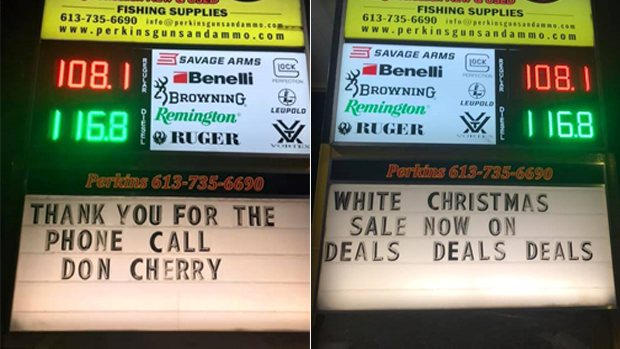 OTTAWA -- The phone rang at Perkins Guns and Ammo last Wednesday afternoon, and owner Lance Perkins didn’t think much of it.  After all, his business, equipped with a gas bar, convenience store and gun shop along Pembroke Street West in the Ottawa Valley town of Pembroke, is a busy one.

“My son answered the phone and he said ‘Dad it’s Don Cherry’ and I said, ‘Wow!’,” Perkins told CTV News.

The sign made its way around social media, some calling it racist and inappropriate, others giving it a thumps-up.  Perkins said he just wanted to show his support for Cherry, and said the “WHITE FRIDAY” reference had nothing to do with skin colour.

“I couldn’t use the word ‘black’ because of Trudeau using blackface,” Perkins told CTV News on November 25, “and Black Fridays… we’re not American”.

Perkins says Cherry thanked him for giving him support, “we were just two old guys saying thank you for supporting each other,” Perkins laughed.

Perkins said after the CTV story aired the feedback was only positive,

“I had so many other nice phone calls from all across Canada, also Houston Texas and Colorado, I had emails from Germany,” Perkins says, “there has been no negativity.”

“The news broadcast made a lot of people happy in this country,” Perkins adds, “I’m amazed how very well it spun around the way it should have.”

Since Cherry’s call, the gun store owner has now updated his sign.  It now reads:

“THANK YOU FOR THE

When asked why he decided to change his sale name from “White Friday” to “White Christmas” Perkins says, “I just didn’t want to wind-up everybody, the last thing I need is to wind-up anyone the wrong way.”