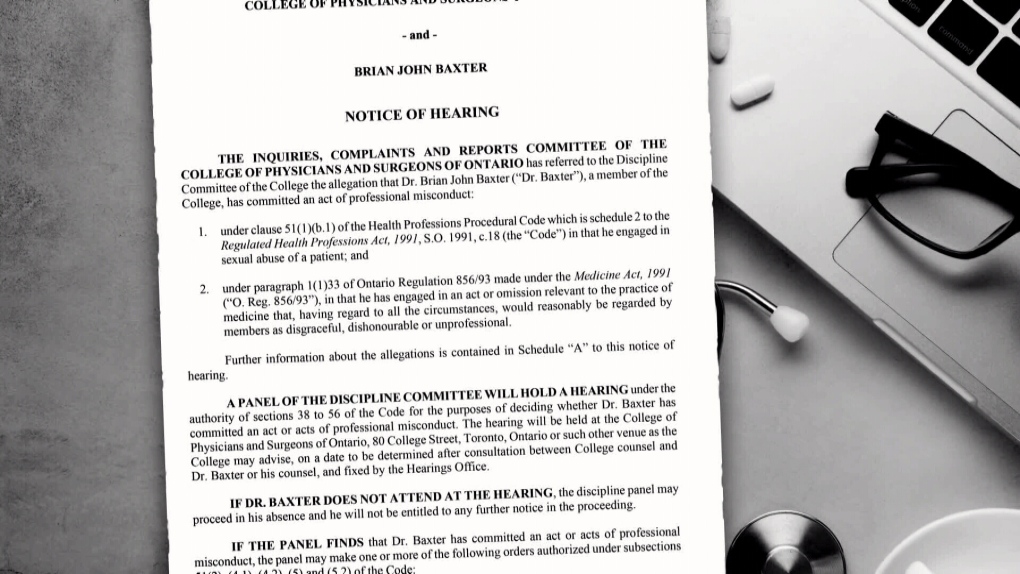 A family doctor in Pembroke will face a disciplinary hearing this spring after being accused of sexual abuse involving two patients.

OTTAWA -- A family doctor in Pembroke will face a disciplinary hearing this spring after being accused of sexual abuse involving two patients.

The College of Physicians and Surgeons has scheduled a hearing for Dr. Brian Baxter for this May. The College alleges that Baxter, 70 years old, engaged in a sexual relationship with one patient and engaged in sexual touching of another patient during a medical appointment.

The College also said in its filing for a hearing that Baxter engaged in "disgraceful, dishonourable or unprofessional conduct" by providing "misleading information to the College during its investigation" and "inappropriately combining treating and personal relationships," with the two patient complainants.

Baxter's lawyer, Andrew McKenna with Gowlings WLG in Ottawa, said it would be inappropriate for he or Baxter to comment at this time as the matter is before the Colleges of Physicians and Surgeons. McKenna said Baxter intends to defend himself before the CPSO disciplinary committee at his May hearing.

A hearing is scheduled for May 3 through May 7 and May 17.

Baxter has had restrictions placed on his practice as of Dec. 11, but a spokesperson for the College of Physicians and Surgeons said the restrictions are a separate issue. They said the CPSO is limited in the information it can release, but for the time being, Baxter is limited to 45 patients per day, which must be under the guidance of a Clinical Supervisor.

The decision is set to be revisited after six months, the CPSO said.

Baxter has been reprimanded in the past after a 2017 complaint about his professional conduct, which included allegations that Baxter may be trading prescriptions for narcotics, sexual favours and landscaping work from patients, and that he took patients away for the weekend and took them to strip clubs. Baxter denied the allegations with respect to sexual abuse of patients but acknowledged shortcomings in his practise relating to record keeping and prescribing.

The Medical Inspector's report into the incident found "significant concerns" with Baxter's prescribing practices and his record-keeping, as well as "other concerns about clinical care of patients generally."