A new baby store in downtown Pembroke, Ont., will have it so the first word out of your baby's mouth is "eh".

Canadian Baby Co. opened on Pembroke Street West in May. It’s a baby boutique entirely inspired by being Canadian.

"I wanted to try and go with a Canadian lifestyle theme," said owner Carleen Clouthier.

"I just try to think of things Canadians like as a whole and try to incorporate it into the baby form," she told CTV News. "Because everything seems to look cuter when it's in tiny sizes."

Clouthier did a full 180-degree career change to become self employed. After years of doing data entry, the toll of sedentary work wore on her body. She says it took her three years to discover that a Canadian themed baby store was what she was looking for.

"Our family is very outdoorsy and my husband has a logging operation," she says of her inspiration.

"I felt that a baby boutique with items that I appreciate as a Canadian would be nice to offer the Ottawa Valley and surrounding area." 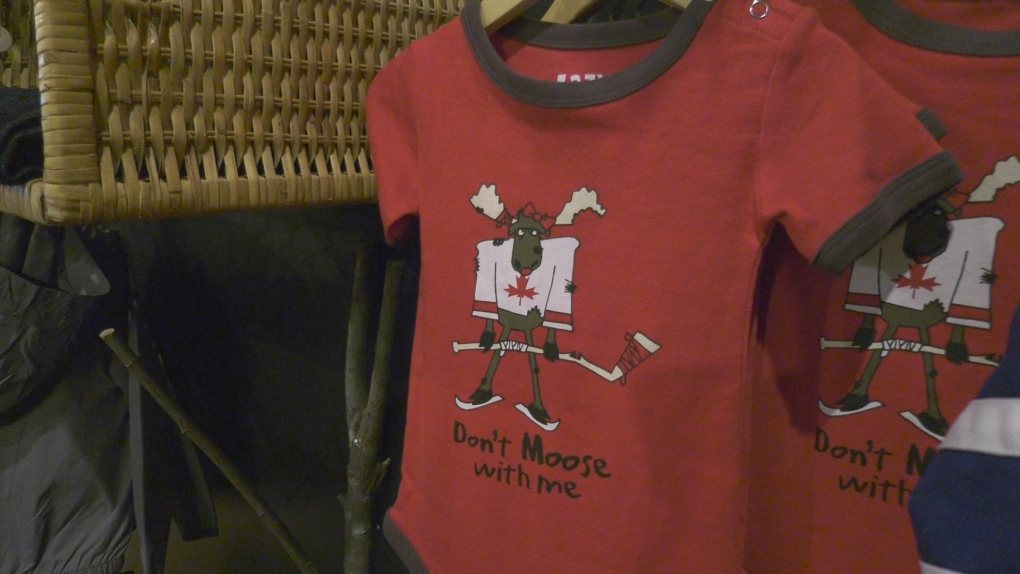 Many of the clothing options available feature animals such as moose, deer, and bears. There are baby-sized plaid shirts and NHL jerseys available. Even the store's details are Canadian, such as the clothing racks made out of tree branches and spruced up with greenery.

Clouthier also makes a point of avoiding the "blue for boys, pink for girls" stereotype, with most of her inventory in gender-neutral colours.

"There's a better chance I'm going to sell it if it's gender-neutral," she says. "If it's pink or blue and someone is coming in, there's half the chance that I'm going to have a sale for that item than if it's something that's going to be for either-or."

In a city dominated by big box stores like Walmart, Clouthier says it's her particular style that helps her stand out on Pembroke's main strip.

"I find that a lot of people come here and they want gifts, they want something unique that they can't find at Winners or Walmart."

A senior government official says a Canadian military assessment team is on its way to Turkiye in the wake of a devastating earthquake that's killed thousands.

A man has been arrested and two children are dead after a driver crashed a city bus into a daycare in Laval, Que. Wednesday morning. The deadly crash sent multiple children to area hospitals and parents scrambling to find their kids shortly after they dropped them off for the day at the Garderie éducative Sainte-Rose, north of Montreal.

Ride-hailing app Uber has brought back its carpooling service in Toronto, Montreal and Vancouver after a nearly three-year hiatus due to COVID-19 concerns.

In a first for the Bank of Canada, it has released a summary of deliberations by its governing council regarding its policy decision to raise its key interest rate target by a quarter of a percentage point to 4.5 per cent in January. Here are five key takeaways from those discussions.