Paramedics praised for trying to save lives after head-on crash 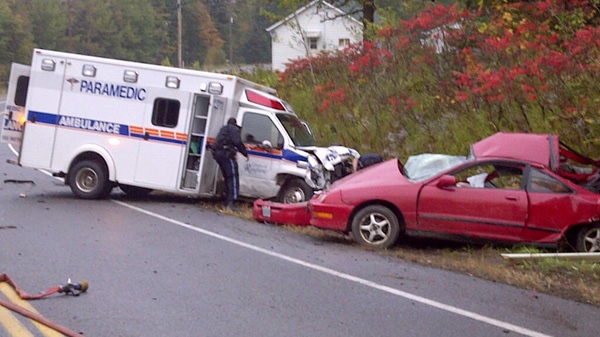 An ambulance and car lay on the side of Calabogie Road after a fatal crash on Saturday, Sept. 24, 2011.

Two Renfrew County paramedics are being commended for their efforts to save two people who crashed head-on into their ambulance.

Police say the crash happened around 4:30 p.m. Saturday afternoon when the paramedics were driving north on Calabogie Road between Burnstown and Calabogie.  A southbound 1999 Acura Integra lost control and hit the ambulance head-on.

The victims have been identified by OPP as 25-year-old Mitch Albert of Ottawa and his passenger, 27-year-old Linsey Cote of Beckwith.

The road was wet at the time. The paramedics were not responding to a call and there wasn't a patient in the ambulance at the time.

The paramedics were not seriously injured in the crash yet were able to get out of the ambulance to try and treat the two people in the car that had hit them.

Despite their efforts, Albert and Cote were pronounced dead at the scene.

The crash is still under investigation by the Ontario Provincial Police.