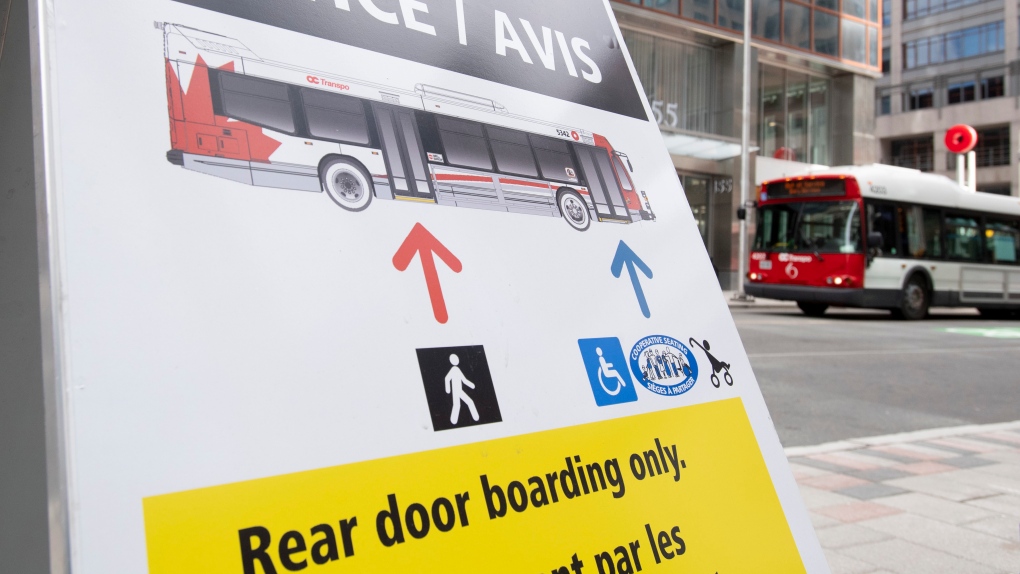 A bus passes a sign indicating users should enter the bus by the rear door as part of COVID-19 measures in Ottawa, Thursday April 16, 2020. (Adrian Wyld/THE CANADIAN PRESS)

OTTAWA -- A new report prepared for Ottawa's transit commission shows the COVID-19 pandemic impacted ridership more significantly in Ottawa than in other major cities in Canada.

The transit commission has routinely heard from staff that ridership on OC Transpo, Para Transpo and the LRT is much lower than pre-pandemic levels, but this new report presents data suggesting the makeup of Ottawa's workforce has played a major role in the decline in ridership across the transit system.

The report states that Ottawa's rate of working from home played a major role in the drop.

"According to Statistics Canada, Ottawa had the highest rate or people working from home in the country, with close to half (47 percent) of all workers performing their tasks from home from April to June 2021."

Para Transpo ridership dropped by about 70 per cent from March to December of 2020, but showed signs of recovery in 2021. April, May and June all showed higher ridership in 2021 than in 2020. April 2021 has the highest year-over-year ridership gain at 114 per cent.

"March 2020 marked the start of a steep decline in customer contacts in all categories in conjunction with a steep decline in ridership caused by the COVID-19 pandemic. Winter 2021 had comparatively much fewer contacts than the previous year. This trend improved slightly over spring and summer while still being much lower than year over year," the report states.

More than three quarters of all customer service requests are phone calls.

Injury and crime rate up as ridership tumbles, but events are down overall

The lower level of ridership is getting the blame for an overall increase in the rate of injury and crime on the transit system, but staff note that, in raw numbers, injuries and crime are down overall.

There were 1,500 reported crimes across the transit system in the 12-month period of study, which the report characterizes as a "slight decrease from years past." These include crimes against the person, such as assault and sexual assault; property crimes, like theft and vandalism; drug offences; and other criminal code offences, such as breach of peace, bail violations, and weapons offences.

Transit commission meets on Wednesday, where the report will be presented. Other issues on the agenda include an update on the Confederation Line, which will have been shut down for a full month by that point due to a derailment, and in camera discussions regarding union contracts with the Amalgamated Transit Union and CUPE.