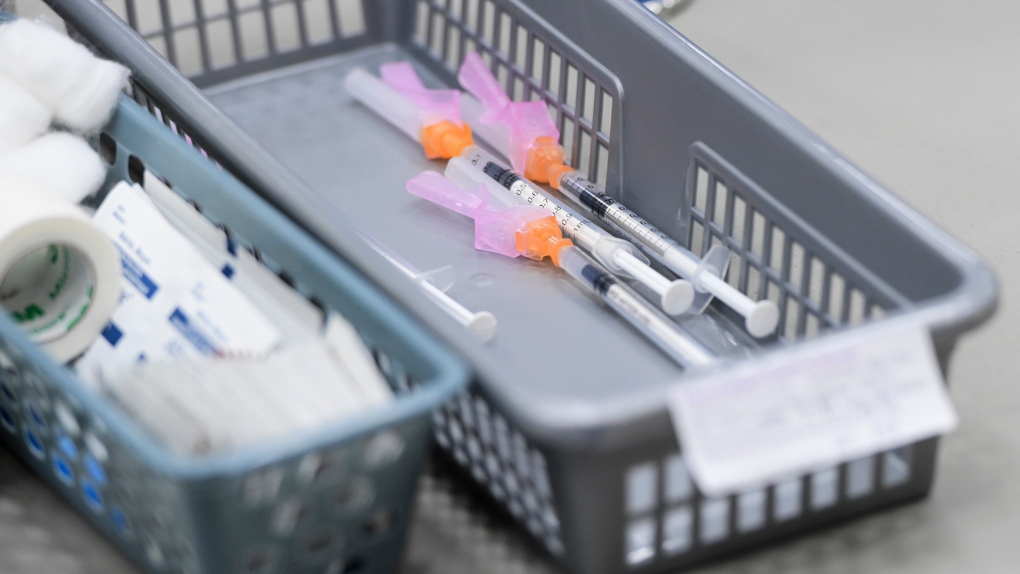 A basket of needles containing Pfizer-BioNtech COVID-19 vaccine waits to be administered to patients at a COVID-19 clinic in Ottawa on Tuesday, March 30, 2021. THE CANADIAN PRESS/Sean Kilpatrick

OTTAWA -- It appears there is little hesitancy among children 12 to 17 or their parents in Ottawa to be vaccinated against COVID-19.

The City of Ottawa said in a tweet Saturday that Ottawa is leading the province on vaccine coverage for the 12 to 17-year-old age group, the youngest people who are able to receive a COVID-19 vaccine.

As of Friday's update from Ottawa Public Health, 78 per cent of youth 12 to 17 had first shots, ahead of the provincial average of about 60 per cent.

Ottawa is trailing in second doses for children, however, with 13 per cent of 12 to 17-year-olds fully vaccinated, behind the provincial average of 18 per cent. In Toronto, nearly one third of all 12 to 17-year-olds were double-dosed as of Thursday.

However, experts expect Ottawa to catch up on second doses among youth quickly.

"I think it’s a positive sign to see, even the fact that we’ve had such wide acceptance and lack of hesitancy amongst that group. No reason to think that won’t continue," said Dr. Kwadwo Kyeremanteng, critical care and palliative care physician at The Ottawa Hospital.

An update on vaccination coverage in Ottawa is due Monday afternoon. Last week, Ottawa Public Health announced a record 131,000 doses were administered in Ottawa between June 27 and July 3. More than 96,000 doses had been administered locally as of Friday morning.

59 new cases of COVID-19 in Ottawa on Wednesday, hospitalizations and ICU admissions rise

'Getting our feet under us:' Ottawa restaurants adjust to new COVID-19 vaccine passport