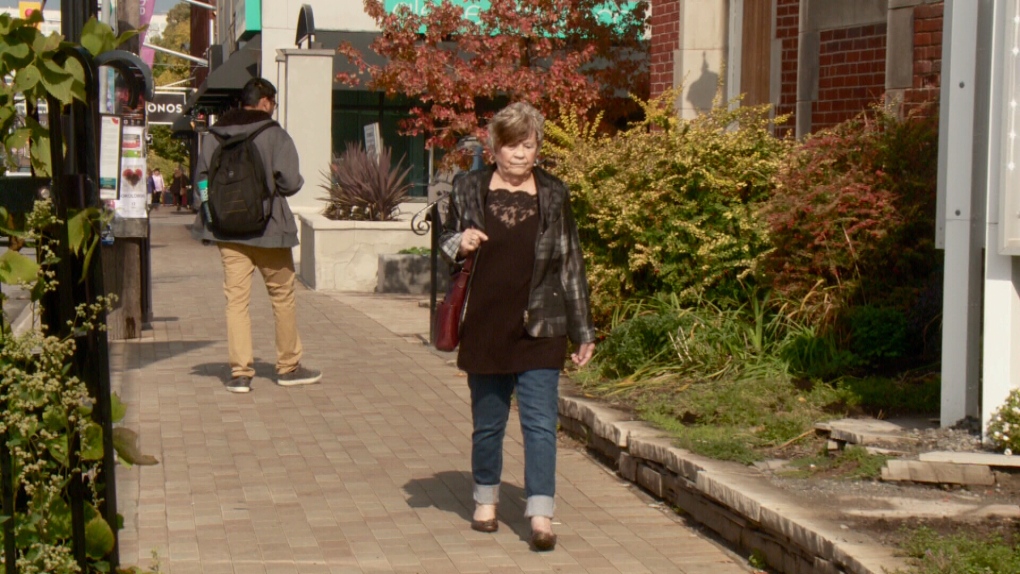 Erin McGowan on Bank Street in the Glebe.

We all know the focus on distracted driving.  And if you've been caught texting behind the wheel, you know the penalty is pretty stiff.

Now some are wondering if we should shift that focus to include distracted walking.

How many times have you seen someone cross the street, their heads buried in their phones, too busy texting to look up?

For one Ottawa woman, a distracted walker took her right off her feet.

After 34 years of slingin' dogs on Bank Street, Terry Scanlon has seen it all when it comes to distracted walkers.

“They almost collide with the cart,” Scanlon says, “I have to stop them, say, “Just a second, you got to push over this way a little bit.’

In fact, there's no shortage of funny and frightening videos on YouTube of people so absorbed in their phones that they fail to see anything in front of them.

There was certainly nothing funny about what happened to Erin McGowan a couple weeks ago when someone plowed into the back of her as she crossed Bank Street.

“She was texting on the phone,” McGowan recalls, “and she ran right back into me. I just saw her coming, but not really, I just sensed something and I went right down on the sidewalk.”

McGowan had just had a knee replacement and worried she had damaged it.  The woman apologized.

“It happens all the time,” she says, “you see people in the intersections, on the street.  I don't know what they can do about it.  How they can enforce it, but it's a very dangerous thing.”

There was a private members bill introduced last year in Ontario that would have fined pedestrians up to $50 for crossing the street while using their phones.  The “Phones Down, Heads Up” Act died when the assembly was dissolved for the election campaign.  But elsewhere, in the U.S. for instance, these so-called “zombie laws” are gaining a foothold.

Constable Phil Kane with the Ottawa Police Traffic Enforcement Unit says distracted walking is a recipe for disaster because many drivers are distracted, too.

“I've seen injuries in the past because of it, people walking into traffic,” he says, “minor injuries, luckily but at some point there is going to be a fatal and that's what we want to avoid.”

“We all do it,” says one woman, her phone in her hand as she walks in the Byward market, “We’re distracted, so it’s very bad.”

She's keeping her head up and hoping those around her do as well.