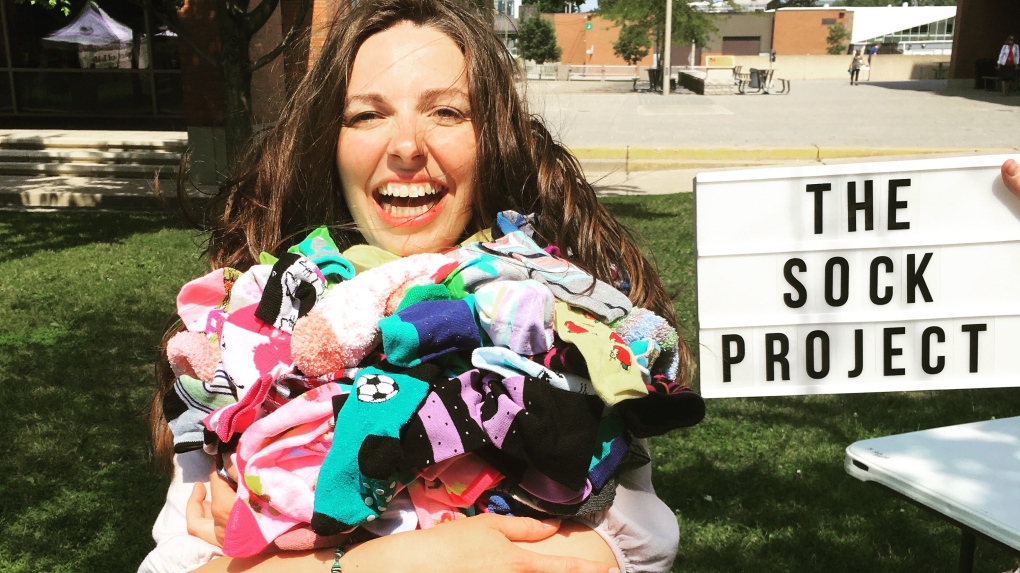 OTTAWA -- An Ottawa woman is raising awareness about autoimmune diseases and other chronic illnesses by handing out funny pairs of socks for free.

Jessica Baird founded The Sock Project in 2017 after taking medical leave from her job as an elementary school teacher. Baird had become ill with what was later diagnosed as Ankylosing Spondylitis (AS), an autoimmune disease that affects her spine, lower back joints and vision.

After posing a video to social media asking for 365 pairs of fun and silly socks for her to wear each day the response with overwhelming.

“People have responded really well. I had so many socks that I did not really know what to do with them at first, and so I decided to start reaching out to people on social media involved in chronic illness groups telling them about my story. I said, 'Send me your address and I’ll send you some socks and you can pay it forward,'” Baird said. “I see this being a lifelong commitment to helping the world with illness.”

Since the video in 2017, she has given away almost 6,000 pairs of socks to those battling chronic illness and autoimmune diseases.

“The reaction is very powerful. I carry a backpack with me at all times with socks,” Baird said. “People will ask me what the flag on my back is, what the Sock Project is, then I’ll tell them it’s raising awareness for auto immune diseases.”

No longer able to teach, Baird has made it her mission to bring a smile and a laugh to people dealing with chronic illnesses.

“They will tell me their story and I’ll reach into my bag and pull out a pair of socks and I’ll share that with them,” Baird said. “We share a few moments of tears and happiness.”

As for the future, Baird continues to battle her illness; there is no cure, but her commitment to raising awareness and putting smiles on people's faces shows no sign of slowing down.

Her philosophy can be summed up in seven words.